Lonneke Gordijn and Ralph Nauta of Studio Drift speak to Dezeen in our latest Screentime interview at 5:00pm UK time, ahead of a secret performance that we will live stream as part of Virtual Design Festival tonight.

Gordijn and Nauta will speak to Dezeen's editor-in-chief Marcus Fairs about their work from 5:00pm UK time. The secret performance that will take place from 9:00pm.

Studio Drift, which the artist and designer duo founded in 2007, produces experiential sculptures, installations and performances, which often use technology to explore natural phenomena and humans' relationship to nature.

One of the studio's best-known projects is its flying sculpture Franchise Freedom, which comprises hundreds of drones that have been programmed to mimic the behaviour of a murmuration of starlings in the sky.

The studio has performed the installation around the world since it debuted at Miami art week in 2017, including at the Kennedy Space Center last year.

Other projects that explore avian movement include Flylight, an installation made up of 300 cylindrical glass tubes, which move to the rhythm of a bird's wing in flight.

Other key projects by Studio Drift include Drifter, a giant concrete-like cuboid suspended in midair, seemingly defying gravity, and Fragile Future, a series of light sculptures featuring glowing dandelion seed heads – each one painstakingly created by attaching 1,200 dried dandelion seeds to an LED by hand. 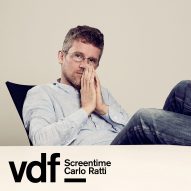 San Francisco's Carpenters Workshop Gallery put on an exhibition of many of these works earlier this year.

This year, the studio also created Ego, a kinetic sculpture made of 10 miles of ultra-fine nylon, for the Dutch National Touring Opera's production of the opera L'Orfeo.

Studio Drift was founded by Gordijn and Nauta in 2007, two years after they both graduated from Design Academy Eindhoven.