The living and dining rooms of this house overlooking a river valley in Connecticut, USA, are contained in a timber-clad box raised up by concrete buttresses (+ slideshow).

Bridge House was designed by Connecticut firm Joeb Moore & Partners for a couple who wanted a countryside retreat they can escape to from their home in New York City.

They settled on a site in a meadow in Litchfield County above the Housatonic River Valley and invited the architects to develop a proposal to make the most of its rural setting.

Influenced by the cascades of the nearby Kent Falls State Park and the traditional wooden bridges in the area, Joeb Moore & Partners conceived the a house as a bridging form that extends out from the slope.

"The bridge form is a device that allows the natural landscape and ground features to flow directly underneath the house, unimpeded," architect Joeb Moore told Dezeen.

"The house bridges over the natural topography, instead of ploughing into it, allowing occupants to enjoy a direct connection with the natural flows and life of the surrounding geography," Moore said.

The suspended box housing the living spaces is supported by a pair of concrete buttresses that pierce it vertically, culminating in chimneys for the twin hearths contained within them.

"These massive concrete fortifications emerge from the ground and are thought of as a natural extension of the stone that is indigenous to the region," explained Moore. 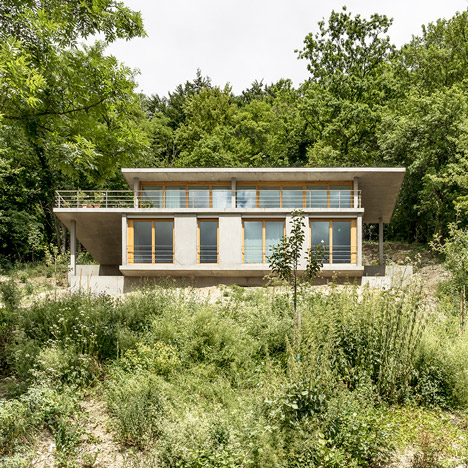 "Aesthetically, the buttresses elevate the house and help to produce the treehouse-like space we were seeking in the main entertainment and circulation spaces," he said.

Further walls help to prop up the rest of the upper storey, which was constructed with a lightweight timber frame.

Red cedar cladding provides a contrast to the raw concrete and is applied vertically to echo the trunks of the surrounding woodland.

A short bridge crosses the gap between the ridge on one side of the site and the house's upper storey leads to the living and dining area at the centre of the building's plan.

This room is glazed on both sides to optimise daylight and views. One side faces the hillside and the other looks out across the sloping meadow, with doors at either end opening onto a long balcony.

"The bridge spaces act as an optical device or viewing chamber, where near and far vistas are captured and focused for continuous viewing," said Moore.

Light wells next to the buttresses provide views straight through the house and incorporate skylights to illuminate the staircases that descend to bedroom suites at either end of the lower level.

A north-facing clerestory window runs along the edge of the ceiling in the living room, providing additional daylight and views of the treetops.

Louvres stretching across one facade provide shading from direct sunlight, as does the positioning of various volumes to create overhangs sheltering the spaces below.

The master bedroom is housed in a section of the upper floor that projects out towards the valley. A similarly extended wing at the other end reaches in the opposite direction towards the ridge and contains the garage.

A small bathroom next to the kitchen features a bright red ceiling in the shape of a truncated pyramid that culminates in a skylight.

A deck situated beneath the bridging upper storey accommodates an outdoor lounge area facing the fire and a wall onto which a retractable projector beams images.

Photography is by David Sundberg/Esto unless stated otherwise.