Architecture studio Cadaval & Solà-Morales has transformed a traditional white brick house in Mexico City into an apartment complex, with the addition of a row of black penthouses (+ slideshow).

The Córdoba-Reurbano Housing Building is situated in the city's Colonia Roma neighbourhood, which was devastated by an earthquake in 1985.

A 1920s building survived the earthquake but was recently left unoccupied following the death of its owner.

"We retained as much of the existing house as possible and the configuration of the apartments, which are all different, was dictated by the different spaces," architect Kecho Quenke told Dezeen.

According to Quenke, "95 per cent" of the original building was kept intact, despite local regulations only requiring the preservation of the main facade. 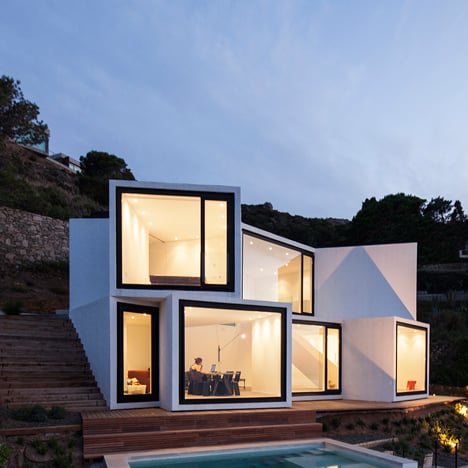 The new apartments are slotted inside and on top of the existing structure in a way that is designed to minimise signs of interventions.

The original property occupied the majority of the plot and was arranged along one edge of its boundary, with a small courtyard created by a recessed section.

An extension added in place of a derelict service area towards the rear of the plot now wraps around a second courtyard to form an overall symmetrical plan.

Materials were carefully applied to maintain consistency between the old and new sections of the complex, although the differences are visible if inspected closely.

Both the historic and contemporary structures are clad in brick, but the cleaner, industrially produced brick of the new addition distinguishes it from the aged, rough surfaces of the original building.

The floor within the existing building was dropped 1.5 metres below its original level by excavating the earth behind the facades.

This enabled the apartments accommodated in these spaces to be spread over multiple storeys – up to three in some places.

On top of the existing structure, a fully glazed storey helps to reduce the visual weight of the vertical extension containing the penthouses.

The level above this features black angular roofs and terraces, creating a varying profile that further reduces the solidity of the addition.

"The idea was to create three bands," Quenke said. "One in white of the existing house and the back addition, another one in glass to separate the house from the black roofs, and finally the terraces and the inclined roofs."

By painting the stuccoed surfaces black, the extension appears as a separate volume to the old house. The ridged rooftops accommodate double-height glazed surfaces that all face east so they are not overlooked by their neighbours.

Each penthouse has a tiled roof terrace, some of which extend over several levels and onto the sloping portions of the roof.

The interiors of the apartments all vary as their rooms overlap across the different levels. Exposed brickwork and other raw surfaces, including concrete and untreated wood offset by white-painted walls, create some consistency throughout the spaces.

More architecture and design in Mexico