Thin sheets of brightly painted steel have been folded to create this origami-inspired canopy, designed to shelter a school playground in an Andalusian village from the sun and rain (+ slideshow).

Featuring a pale turquoise roof and a hot-pink underside, the angular pavilion was created by Spanish architect Julio Barreno Gutiérrez for a school in Algodonales – a mountain village in the Cádiz region of Andalusia in southern Spain.

The playground of the Principe de Asturias school is split over two levels, which before now were poorly connected. 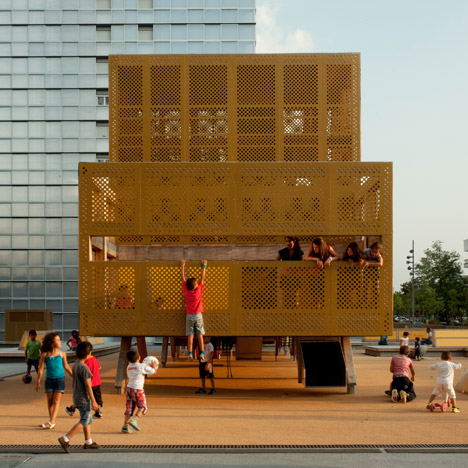 BASE adds a metal-clad playpark to a Bordeaux housing estate

To improve access between them, the architect added a ramp and a short flight of stairs.

"Two playgrounds are separated in two different levels to the west and north sides, a different level that became dangerous for the little kids," explained Barreno Gutiérrez, whose past school-design projects include an extension featuring lime-green interiors and a zigzagging walkway.

"The goal for this project was the functional necessity of building a space protected from the strong sun or untimely rains, to allow everyday breaks, and an interesting improvement of the connection between the two playgrounds," he added.

The metal canopy straddles the two different levels to protect the ramp and staircase from the elements.

Sheets of one-centimetre-thick steel were bent to create the faceted shape and pointed legs. Both the bright colouring and folding technique are intended to be reminiscent of origami.

"The architectural tool was found in the fancy children's world full of colour and fun," said the architect.

"The structural quality and the inherent flexibility of origami, typical of the many craft activities developed in class by the children themselves, became the genetic property to formally develop the managed element," he added.

Algodonales, a typical white-painted "pueblo blanco" in the Sierra de Lijar mountains, is famous for its hang gliding school and as a centre of Spanish guitar production.

Photography is by Julio Barreno Gutiérrez.