Columns of circular openings help to shade the windows from the strong sunlight, but are too small for wayward balls to easily get through. They cast polka-dot patterns of light across the exposed concrete interior.

Elisa Valero Arquitectura was asked to create the multi-purpose hall for the Cerrillo de Maracenas School on the outskirts of Granada. 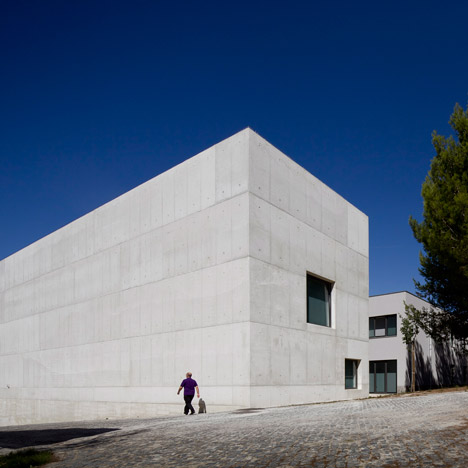 The southern Spanish city is famous for its Medieval and Moorish architecture, in particular the hilltop fortress Alhambra – which is set to gain a new visitor centre by Álvaro Siza.

The new block sits between the existing buildings and the sports court of the 50-year-old school building, which has a traditional terracotta tiled roof and hosts 250 students under the age of 12.

The new wing has a smaller ground floor containing a classroom, which allows space for a covered entrance to the sports court from the main building. The larger upper floor is left unpartitioned as a multi-use space.

"The building was in need of a new flexible multipurpose space, and a second stairway for security reasons," explained the architects.

"The rules of the game were very clear: there was very little money, two months in which to build, numerous building and other regulations, and the goal of energy efficiency."

The structure is made up of a double layer of reinforced concrete, which was devised by concrete specialists Elesdopa to be built without formwork.

The decision to leave the concrete construction exposed was influenced by budget constraints – the entire project was completed for €81,750 (£59,000).

"On the outside there is nothing but concrete; inside, just concrete, and nothing but moving light and space to grow up in," said the studio.