Named the Equestrian Centre, the building was designed by studio founders Carlos Castanheira and Clara Bastai for a site near Cabo do Mundo beach in Leça da Palmeira, a coastal region to the north of Porto.

This stretch of coastline bordering the North Atlantic Ocean is also home to the Piscinas de Marés – the seminal seawater swimming pools completed in the early 1970s by Portuguese architect Álvaro Siza Vieira, who is a regular collaborator of Castanheira's.

The riding school sits among a community of houses. This prompted the architects to break it down into a group of four structures, allowing it to appear smaller in scale. 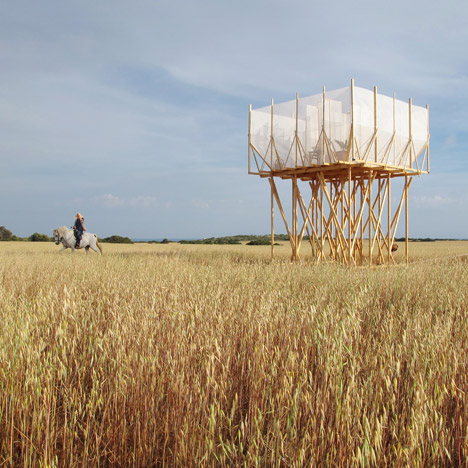 Each of the structures houses a separate function of the centre – two are used as indoor arenas, while the third is a stable block and the fourth contains facilities for riders.

At the request of the client, the cladding and structure of the building – including partitions, walls and ceilings – are made from timber.

This structure is left exposed across both the interior and exterior – a feature also exhibited in a recently completed Melbourne riding centre.

"Just as in any other project, it is necessary to listen to the clients and hear their requests, requirements and aspirations," said Carlos Castanheira.

"Being unable to talk to the horses, who will be the real inhabitants of the place, I was obliged to engage in dialogue with those who know and work with horses."

The stable block is linked to one end of the larger arena and provides access to indoor and outdoor training spaces.

The second arena is connected to the first, meaning there is capacity to exercise the horses, even in inclement weather.

"The need for indoor spaces has to do with protection from the more aggressive aspects of the climate, such as storms, because it isn't always possible to be outdoors," explained the architect.

The sides of the arenas have pentagonal profiles that angle outwards. Large dormer windows project out from the roof, in addition to the more standard windows set into the sloping walls.

Bathing and grooming areas for horses and riders are located at either end of the stable block, which can be separated from the arenas by a wide sliding door.

The final block – containing glass-fronted administration offices, a lounge and dining facilities for the staff and riders – links to the other end of the arena. A mezzanine over the centre of this space provides rooms for overnight guests.

A grass courtyard sits between this area and the stable block, while a pool of water borders the gables to the east.

"We always worry about the wellbeing of the people who will inhabit the spaces that we design and hope to see built," said Castanheira.

"We are functionalists, if only because architecture has to be functional and so it forces us to be so too. If not, we'll be condemned to discomfort, absurdity and eventually ridicule."

The two indoor arenas are accompanied by outdoor training areas dedicated to jumping and racing, as well as grazing paddocks.

A lake and swimming pool overlook the sprint track – a narrow, bowing strip of land that runs along the southern perimeter of the site.

The site also includes an old barn, where horses can be walked in a circle by a machine. A ruin overlooking the sprint track was also repaired and retained as part of the project.

Castanheira and Bastai founded their studio in 1993. Since then, Castanheira has collaborated on many projects with Siza, including a floating industrial park in China and a modern art museum in South Korea inspired by a sketch of a cat.

More architecture and design for animals