Work has begun on the new "School of Genius" campus in New York City, which aims to boost the city's burgeoning tech industry (+ slideshow).

Located on Roosevelt Island, a sliver of land that sits between the boroughs of Manhattan and Queens, the new 12-acre school promises to be "one of the most environmentally friendly and energy-efficient campuses in the world."

Morphosis, Handel Architects, and Weiss/Manfredi have all designed buildings for the project, and the site was masterplanned by Skidmore, Owings & Merrill and James Corner Field Operations.

Cornell Tech is a partnership between Cornell University and the Technion – Israel Institute of Technology. 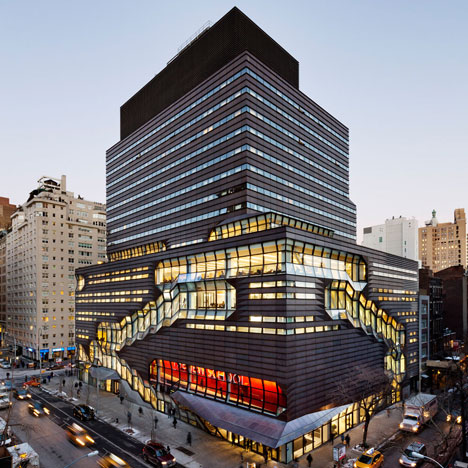 Dubbed the "School of Genius" by the local media, the university was founded in 2011 and is currently housed inside Google's headquarters in Manhattan. It offers graduate degrees in business and computer science.

Thom Mayne of Morphosis Architects has designed an academic building – called the Bloomberg Center – for the new campus. The facility is designed to be one of the largest net-zero-energy buildings in the US, with all of its power generated on site.

"The building is a departure from traditional academic facilities, with an open plan and extensive collaborative, as well as private work spaces," said the university.

New York-based Handel Architects has designed a 26-storey residential tower that is intended to be the world's tallest Passivhaus building, meaning it will use natural heating and ventilation systems. Rising 270 feet (82 metres), the dormitory will contain 350 units for faculty, staff and students.

Its many sustainable elements include a shaded facade, an airtight building envelope, and an energy-recovery ventilation system.

"Compared to conventional construction, the building is projected to save 882 tons of CO2 per year, equal to planting 5,300 new trees," said the university, which is developing the building in partnership with the Hudson and Related Companies.

Designed by Weiss/Manfredi, The Bridge building is intended to serve as "a crystalline incubator," where academia and industry will collaborate under one roof. The seven-storey facility will house both students and local entrepreneurs working in the digital realm.

"The Bridge at Cornell Tech is a place for companies looking to test and launch products and ideas, a place where research comes to life and technology meets the market," said MaryAnne Gilmartin, president and CEO of Forest City Ratner Companies, the building's developer.

The Cornell Tech campus is slated to open in the summer of 2017. Once fully complete, it will accommodate roughly 2,000 students and hundreds of faculty and staff members.

"Cornell Tech is a revolutionary model for graduate tech education, developing pioneering leaders and technologies for the digital age," said the university.

The $2 billion (£1.26 billion) project is being funded through public and private money, including a $100 million (£63 million) donation from Michael Bloomberg, the business magnate who initiated the project while serving as NYC's mayor.

"Our goal has been to make New York City the global capital of technological innovation, and this new campus on Roosevelt Island is a central part of our strategy for achieving it,” he explained in a 2013 statement.

“It is one of the most ambitious and forward-looking economic development projects any city has ever undertaken, and it’s going to help add thousands of new jobs to our economy in the decades ahead," he said.

NYC is home to several major tech companies, such as Squarespace, Mashable and Etsy. While the tech scene is quickly expanding, the city still lags behind Silicon Valley, where 213,000 people are employed in the tech industry compared to NYC's 90,000, according to reports.

The campus is being constructed on city-owned land near the Louis Kahn-designed Franklin D. Roosevelt Four Freedoms Park, which occupies the southern tip of Roosevelt Island. A historic hospital was razed to make way for the new campus.

To the east, a new Steven Holl-designed public library in Queens is visible across the river. To the west, the campus looks toward the United Nations Headquarters.