Aiming to create a space that doesn't "look or feel like a traditional appliance store", the studio worked with Appliance Love to develop an innovative way to present the brand's products within an old warehouse.

The designers kept the original concrete flooring and large windows, but added a bright red frame to the entrance of the store to increase visibility from the street.

"We wanted to stay true to the industrial nature of the building," designer Jamie Phelan told Dezeen. "We used industrial materials to build the space in an exposed and raw way that would contrast with the pristinely new appliances."

DesignAgency chose the steel rods that are typically used to reinforce concrete – which are also known as rebar – to create the grid-like shelving system. 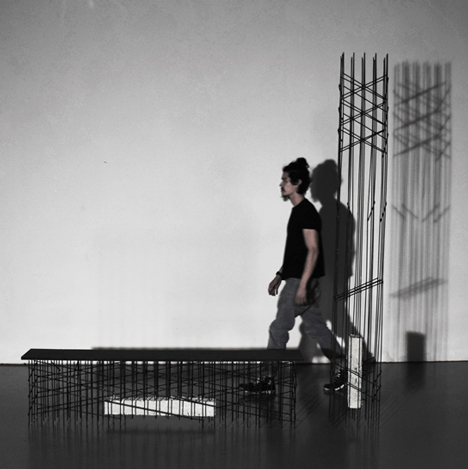 "The rebar grid system was made in sections in a downtown Toronto metal shop," Phelan explained. "It was then brought in, welded together and assembled on site."

The steel grid was designed to "serve as a continuous rhythm and tie each area together" across the entire ground-floor space.

Plywood boxes that can slot in and out of the compartments are used to house smaller appliances, crockery and plants. The boxes can be grouped together and moved around – allowing the space to be changed as needed.

Model kitchens are installed across the space to present the larger appliances such as fridges and ovens in context. Units are constructed from raw plywood and islands are made using solid surface material Caesarstone.

Rebar has previously been used to create a storage system inside a Dublin coffee shop, and also influenced the design of a skeletal furniture range.