NeoCon 2015: US furniture giant Herman Miller is releasing an adaptable shelving system for offices made from lightweight foam that can be used to reconfigure spaces like children's play blocks (+ slideshow).

Designed by Berlin-based Studio 7.5, the polypropylene blocks come in straight and curved versions. Each unit has three furrows or shelves formed by seven sandwiched layers of foam of varying heights.

At nine kilograms (under 20 pounds), the blocks can easily be moved to rearrange and delineate work zones, add privacy, or use as a display space for presentations. The foam also diminishes noise, a common nuisance in open office environments, which can limit productivity.

The system is designed to be intuitive, so anyone can use to adapt spaces immediately without needing hardware to install it. The designers refer to this user-driven approach to space-planning as a "hackable" office. 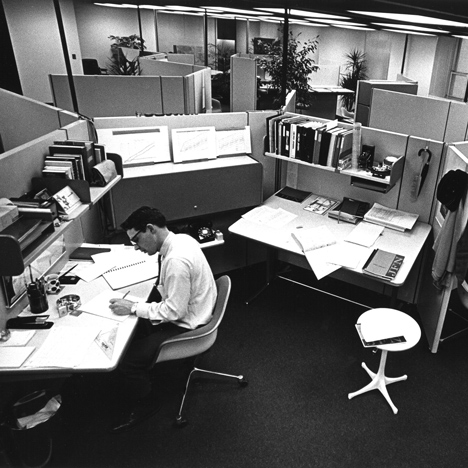 The office cubicle: from commercial flop to best-selling design classic

Recent research has shown that badly-designed open-plan offices are unpopular with workers and can damage output, prompting the release of a raft of new products aimed at helping workers create more privacy and flexible work spaces.

Herman Miller – the manufacturer behind the original office cubicle design – showed the fully realised version of the Metaform Portfolio range at American office furniture trade show NeoCon last week, after exhibiting the concept at the same event two years ago. The products will go on sale this month.

Studio 7.5 is also introducing a companion set of 3-D printed accessories to augment the system, called MetaformTools, including hooks, clips, cups, and tape dispensers. Available in a variety of colours, the tools add contrast and visual interest to the charcoal grey blocks.

In addition to offices, Metaform Portfolio could also be used in stores to display merchandise.

Studio 7.5 has had a long relationship with Herman Miller. They previously designed the company's Mirra office chair, a lower priced companion to the now iconic Aeron chair, and the Setu Chair, a reinterpretation of the Eames aluminum group.