Graduate shows 2015: Royal College of Art graduate Skye Yuxi Sun has imagined a dystopian future where London's Thames Estuary is transformed into a tax haven for the city's elite to resurrect extinct animals.

Intended as a critique on the UK's relationship with offshore financial services, Sun has designed 100 islands that would function as giant safety deposit boxes, allowing 100 billionaires to keep different species separate from the rest of the world. 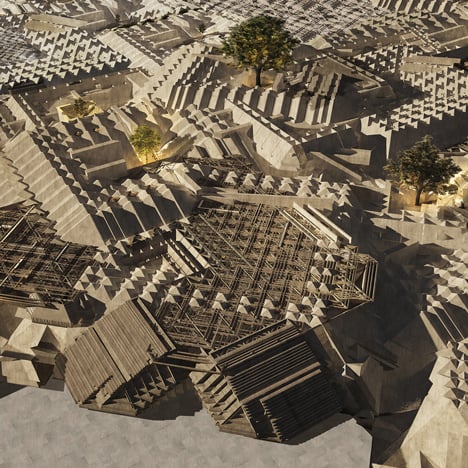 She describes it as "an isolated territory where the rich remake their own world in the image of their investment".

Visualisations show both extinct and fictional animals – including multi-coloured giraffes and woolly mammoths – roaming amongst tropical landscapes, ornate palaces and other monumental structures.

Sun has also created a full-size model of a genetically modified de-extinct bird, with black feathers and an ivory tusk beak.

"These resurrected totems become a cultural heritage and founding myth, representing the identity of the elite and their defiance of extinction – a new form of luxury, stored in their repository mansion tax havens," she said.

The designer developed the project as part of the ADS4 unit at the RCA, tutored by Nicola Koller and Tom Greenall. Students were asked to look ahead to the construction of the proposed Crossrail 2 rail line to develop an alternative future scenario for London.

This proposal, named Treasure Island, suggests that the excavated spoils of the huge infrastructure project could be used to construct the 100 islands. As such, the size of the islands relate to the wealth of their owners, plus each one takes the shape of a different ancient territory.

The floating structures will surround a visitor's island, named Isle of Envy – the closest that members of the public can get to the animals. Here, they can watch the scientific process of de-extinction, or visit the auction houses where each species is valued.

There is also a monolithic cemetery area, carved from a solid block of marble floated in from Italy.

"The masterplan is formally defined by its owners' desire for privacy, yet their conflicting lust for extravagance is what shapes its character," explained Sun.

"Treasure Island offers the most up-to date geographical security whilst, at the same time, allowing its executive members the most attractive opportunity imaginable – the chance to flagrantly flaunt both their wealth and power over not only their lesser man, but life, death and nature," she added.

The concept is loosely based on the model of the freeport – warehouse complexes where collectors can store valuable artworks tax-free. According to Sun, the Geneva Freeport has a larger collection than the National Gallery in London.

But rather than artworks, Sun chose to use extinct species as a commodity – after a mammoth jawbone was found during the construction of ongoing Crossrail transport project's first line, which is scheduled to complete in 2018.

"In 2029, resurrecting extinct animals has become the badge of a billionaire's membership – a symbol of total triumph over the natural order, and the totalitarian power of money," she added.

The project is being exhibited until 5 July as part of this year's Show RCA graduate exhibition in London. Other projects at the show by architecture graduates include a conceptual risk theme park, while the design products include a spiral staircase for climbing trees.