Located on Worthing beach in the south of England, the small timber-framed structure has the same gabled form as a typical beach hut, but all four of its walls and its roof are clad entirely with mirrors, allowing it to camouflage with its seaside surroundings.

"The beach hut has a strong geometric form that we felt would look brilliant finished in mirrors," explained Stuart Eatock, one of the directors of ECE Architecture. "They reflect its context and create a playful folly."

Typically colourful and arranged in a repetitive form, beach huts have been a prominent fixture at British seaside resorts since the 19th century. They offer a place for regular visitors to store deck chairs or prepare food and drink.

The mirrored cabin is the latest is a series of recent projects reimagining the typology, including a row built from stones and sand, and a group of huts that are accessible for wheelchair users.

Simple in construction, the structure is made up of seven pieces, each of which is covered in a laser-cut sheet of mirrored acrylic. 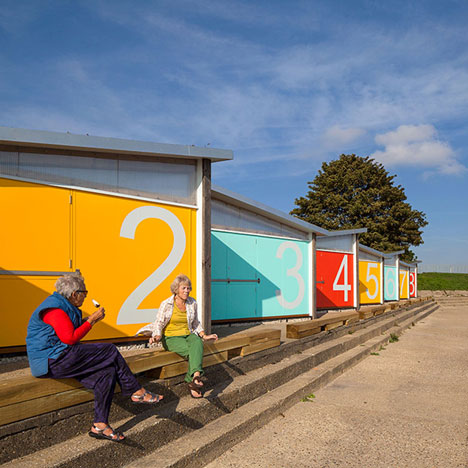 The design and assembly process took six weeks in total, before the final structure was erected at the end of June.

"Word of mouth spread, locals began to descend on the beach to see what all the fuss was about," the designers said. "They played with the unusual reflections of the seafront and made the most of a surprising new photo opportunity."

ECE Architecture developed the project from an idea suggested by advertising agency Creative Forager. The aim of the installation is to promote both of their companies, while also engaging the local community.

At night, the light from inside the cabin shines through to reveal the architecture studio's logo, which has been laser-cut into one of the walls. The ad agency's strapline – A Piece of Our Mind – is printed on the outside.

"I had known Sephton from Creative Forager for a while, but we had never taken the time to look more closely at each other’s work," ECE Director Stuart Eatock told Dezeen. "I saw a specific style of ambient marketing in Sephton's portfolio that seemed to be a break from traditional forms of advertising.

"The seed was planted and Sephton presented a selection of 10 ideas to The ECE team and the beach hut stood out for everyone."

Although the temporary installation was dismantled after one weekend, the designers are considering making the hut a more permanent structure, following requests from the public and the local council.

Worthing is located a short distance away from Littlehampton – another seaside town that has seen several unusual architectural interventions, from Thomas Heatherwick's rock-inspired cafe to a 324-metre-long bench by Studio Weave.

These projects were both down to one property developer, Jane Wood, who believes playful architecture can be used to bring new life to sleepy seaside towns. "It has brought people to Littlehampton who tell me they would never come there if it weren't for me," she told Dezeen in an interview last year.

Photography is by Mark Sephton.