This window by Dutch designer Marjan van Aubel is made up from coloured solar cells that harvest energy from the sun and convert it into electricity to charge small computer devices.

The organically dyed solar cells in van Aubel's Current Window generate electricity from the sun – a process derived from photosynthesis, which plants use to convert sunlight into energy.

Sunlight is collected within the orange, blue and pink dye-sensitised solar cells, which are arranged in a tessellating zig-zag pattern created by van Aubel and London-based graphic designer Marine Duroselle. 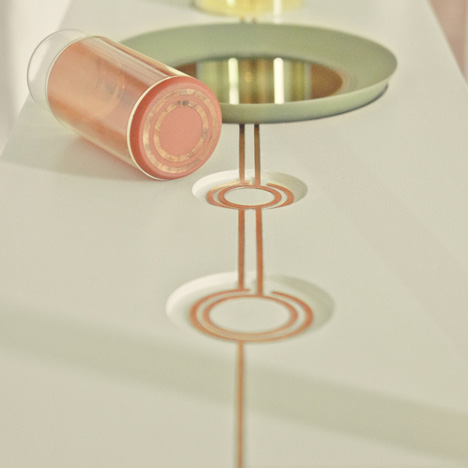 The cells are sandwiched between two panes of toughened glass and connected to a battery contained within a frame featuring USB charging points.

"Current Window is a modern version of stained glass — using current technologies," van Aubel told Dezeen. "The coloured pieces of glass are generating electricity from daylight, and can even harness diffused sunlight."

"Similarly to the various shades of green chlorophyll absorbing light, the coloured window panes harness energy — just like photosynthesis in plants," she continued. 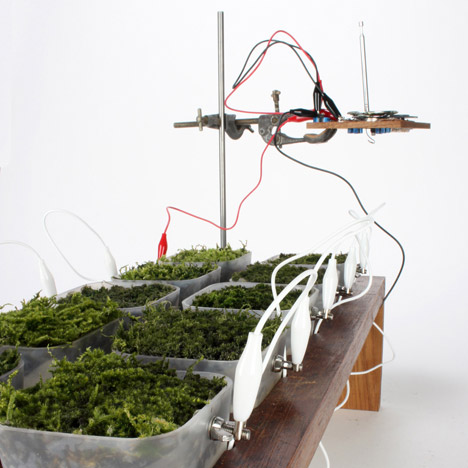 Moss used as "biological solar panels" to power a radio

Each window can harvest up to 25 watts per day, depending on the quality of light and season. A back-up battery hidden in the windowsill stores left over energy to provide power on overcast days.

"Different colours have different wavelengths and thus produce different energy levels," explained van Aubel. "I had to work closely together with the dye-solar cell manufacturer to work out a pattern that was both beautiful and that generated a sufficient amount of energy."

USB ports integrated into the window ledge provide a place to set small electrical devices such as mobiles phones while they charge. A set of diagonal stripes by the charging point illuminate to indicate how much power is stored within the battery.

"Like old stained glass windows that told stories through their colours and patterns; the Current Window tells us a modern story about energy consumption," said Aubel. "The idea is that people can literally see through the window where their energy comes from and how the process works."

Aubel has recently set up a company called Caventou – after the French scientist Joseph Bienaimé Caventou who discovered chlorophyll in 1817 – and is currently working with business incubator Cognicity to put the product on the market.

The first Current Windows will be installed in a home in London's Soho later this year, but Aubel sees the best application of the product within offices, schools and churches – where the windows could be used to power electric lights or developed as Wi-Fi hubs.

Photography is by Wai Ming Ng.