The work of architects including Diébédo Francis Kéré, Heinrich Wolff and SelgasCano features in a new exhibition about African design open the Louisiana Museum of Modern Art in Copenhagen (+ slideshow).

The show – titled Africa: Architecture, Culture and Identity – is a major survey of architecture and design in Sub-Saharan Africa, which encompasses 49 countries south of the Sahara Desert.

The exhibition features architectural models, photography, videos, and other visual material, along with several large-scale installations. The show is divided into seven themes, ranging from "belonging" to "making space".

"Through a number of projects spread over the African continent, the exhibition tells a story of the new architecture of different regions – with its various proposals for accommodating local traditions, strengthen the existing ones and create solutions for the future," said the Danish museum.

In the museum's sculpture park, SelgasCano – the Spanish firm behind this year's Serpentine Pavilion in London – has collaborated with the studio helloeverything to build an enclosure made of colourful poles and plastic sheets. After the exhibition closes, the structure will be moved to Kibera, Nairobi, where it will serve as an informal school. 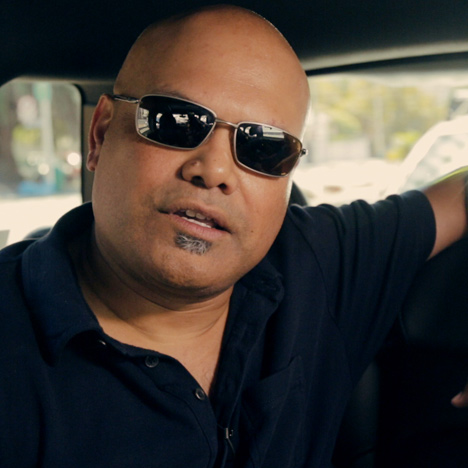 The young Namibian architects Mieke Droomer and Andre Christensen have also erected an installation in the park – a curving fence made of rough-hewn wooden posts. The installation resembles the duo's Dordabis Community Spine project in Namibia, designed with Wasserfall Munting Architects.

Inside the museum, Diébédo Francis Kéré, who grew up in a rural village in Burkina Faso and runs a small practice in Berlin, has erected a 90-square-metre installation using light-coloured, locally sourced wood.

Featuring a canopy and seating made of bundled branches and logs from willow trees, the installation takes its cue from building techniques in Kéré's homeland.

"This architectural installation aims to highlight the importance of shading and sheltering as a form of protection from over-exposure to the sun, as well as an inherent space-making device for community gathering," said Kéré Architecture.

The "city cells" present utopian visions for the future, housing projects for the growing middle class, Colonial Era architecture, and other conditions within the urban areas.

"Sub-Saharan Africa is one of the places on the planet where the cities are growing most," said the museum. The chosen cities are all " important nodal points on the continent and represent a complexity of geography, culture and colonial history that is expressed in different ways of living."

The "rebuilding" section of the show puts the spotlight on Active Social Architecture (ASA), a Rwandan studio founded by Tomà Berlanda and Nerea Amorós Elorduy. They sold the firm in November 2014.

The duo have created brick walls that incorporate lessons learned while working in the architecture department at the Kigali Institute of Science and Technology.

The museum said it was critical to include work that reveals how Rwanda has progressed since the country's 1994 genocide, when over half a million members of the Tutsi tribe were slaughtered by the majority Hutu group.

In the "belonging" area of the exhibition, Ghanaian architect Joe Osae-Addo tells the story of Kente, a traditional Ghanaian textile design that features bright colours and a geometric pattern. Osae-Addo is chairman of ArchiAfrica, an organisation that tracks and promotes contemporary African architecture and culture.

A multi-coloured model of a metropolis is featured in the "building futures" area. Titled "Kinshasa: Project for The Third Millenium," the piece was created by the late Congolese artist Bodys Isek Kingelez, who was focused on an art form he called Architectural Modelism.

Also on show are photographs, films and artworks, depicting projects including the floating school in Nigeria by NLÉ.

Africa: Architecture, Culture and Identity is open through 25 October 2015. It was organised by Kjeld Kjeldsen and Mathias Ussing Seeberg, both curators at the museum.

The show is the third and last in the museum's Architecture, Culture and Identity exhibition series. In 2012, the institution presented the show New Nordic, and in 2014, it staged an exhibition called Arab Contemporary.

Vitra Design Museum in Weil am Rhein, Germany, has also mounted an exhibition about African design that is on view through 13 September. The Vitra Campus is also currently hosting a pop-up store for shoe brand Camper, designed by Kéré.