This daybed by Italian designer Emanuele Magini is based on the blow-up mattresses used for lounging on the beach or floating on a swimming pool.

Magini's Blow for Italian furniture brand Gufram was designed to look like beach air mattresses from the 1970s.

Although it looks inflatable, the daybed is cushioned from polyurethane foam and is supported by four tubular aluminium legs.

The designer came up with the idea while on holiday, where he noticed an air mattress that had been left on a bench beside the entrance to the beach.

"It looked to me as it was floating on air," he told Dezeen. "I found it funny, ironic and yet somehow elegant. I tried to imagine it in my living room and that made me laugh even more." 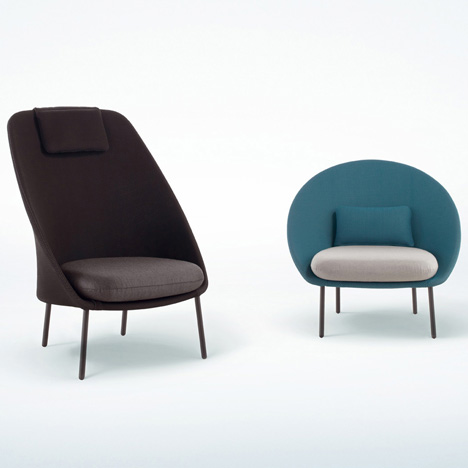 The upholstered surface is ribbed to mimic a lilo's pockets of air, and the top end in angled upward slightly to provide support for the head.

"We needed to create the shape of the air-mattress to recreate the same playful appeal," he said. "But we also needed to build an upholstered and comfortable seat."

The daybed comprises a metal inner structure onto which the polyurethane parts are attached. It is lined with Danish textile brand Kvadrat's Waterborn fabric, which was chosen for its eco-credentials – it uses 70 per cent less water and 35 per cent less carbon dioxide in its manufacture than other microfibre fabrics.

"With projects such as Blow, Gufram confirms its will to continue its research into forms and materials, not only by updating Italian design icons, but also by exploring new collaborations with contemporary designers," said a statement from the brand.

The designer has wanted to work for the Italian furniture manufacturer since before he began his studies.

Gufram was founded in 1966 and gained popularity with its iconic and playful products, such as a coat stand modelled on a cactus, a sofa shaped like a giant pair of lips, and the spongy Pratone seat designed to look like giant blades of grass.

"Who doesn't know Cactus or Pratone?," said Magini. "Gufram is a historic brand and it produced fantastic pieces, which I fell in love with via magazines, even before going to university. I submitted this project to them and it was love at first sight."

While Magini's design isn't actually filled with air, many designers have created products that are – including a bag that inflates to protect its contents and a light that is blown up like a balloon.