Maison&Objet 2015: Spanish studio Mut Design has created a pair of chairs to look like masculine and feminine versions of the same seat. 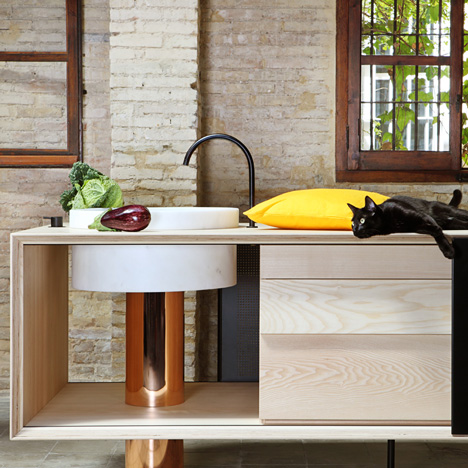 "We wanted to design a collection of two easy chairs with similar characteristics but each with a strong personality," Mut Design founder Alberto Sánchez told Dezeen.

"They each keep their own personality and exclusive features, which is what makes them able to work together or separately."

The "male" chair is taller with a more squared structure and the "female" is lower with a softer shape.

"While one looks pleasant and feminine, the other is defined by its blunt masculine presence. These are Twins, two different seats sharing the same DNA," said the designer.

Suitable for use indoors and outdoors, the chairs are covered with an elastic tridimensional polyester mesh developed especially for the product and for Spanish furniture brand Expormim, which manufactures the designs.

The chairs are on show at Paris trade fair Maison&Objet until 27 January, along with new products by Tom Dixon, Luca Nichetto and Matali Crasset.

Founded by Sánchez in 2010, Mut Design's previous projects include a range of modular kitchen units made from materials usually found elsewhere in the home and a collection of tiles featuring shapes that look like overlapping pieces of coloured paper.