This Victorian-era villa in Sydney has been renovated and extended to meet the needs of a family with an extensive art collection, while a concrete plunge pool caters for its grown-up children (+ slideshow).

Designed by local Smart Design Studio, the flat-roofed concrete extension sits to the rear of the old house called Orama in Sydney's eastern suburb of Woollahra. The clients wanted to adapt the old building to suit the family's lifestyle and art collection.

Containing a double-height dining room, lounge and kitchen, the extension opens into the back yard where a plunge pool and garage have been added to provide both utility and entertaining spaces for the family and their guests.

"The form of the new wing takes cues from the blocky pattern-book forms of the villa ensemble of which Orama is part," explained Smart Design Studio, which also recently worked on interiors for Jean Nouvel's plant-covered One Central Park towers.

"This relationship is revealed only within the site – largely hidden from the street the new architecture is discreet, doffing its cap to the historically significant villa that stands before it," said the team.

The raw-concrete end walls of the extension are used as a neutral backdrop for showing large-scale paintings and sculptural works, which are lit naturally by two glazed walls and narrow clerestory windows. 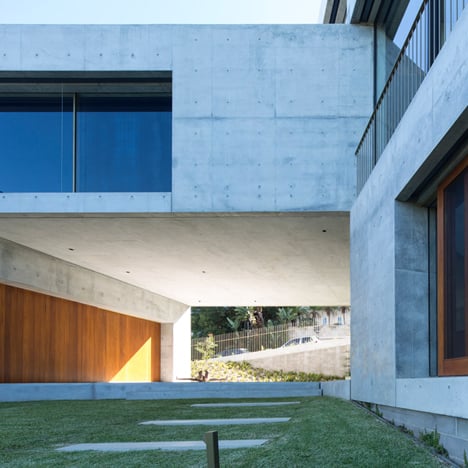 The pair of floor-to-ceiling windows in turn frame a view through the extension to the historic residence beyond.

In contrast with the clean lines and pared-back aesthetic of the extension, the original 19th-century fireplaces, early paint schemes and decorative cornicing have been retained in the old house.

New joinery and lighting was added to give it a "crisp, trim, and tailored" finish that melds the two parts of the house together.

"The project has two distinct halves, requiring distinct yet complementary approaches: the renovation of an historic villa, and the construction of a new concrete and glass pavilion beyond," said the architects.

"The new addition was designed to be minimal in form and detail, with textured raw concrete extending from the walls out into the garden, punctuated by swathes of water, vegetation, lawn, and pebbles," they added. "Where the old building is rich in detail, the new is spare. The striking double-height concrete walls, animated by sunlight, furnish the rooms with little need of embellishment."

A guest suite positioned above the kitchen in the new extension offers garden views. It is linked to the upper floor of the original house by a balcony that looks over the dining space below.

A marble sink, sideboard and a bath tub have been added to the family bathroom, which also features a mirrored wall and an original fireplace that continues on the theme of pairing old fittings with new.

"Conceptually, the aim was to make a new wing of equivalent substance and quality to the 19th-century villa, but with all skill and detailing devoted to making the structure spare and minimal, in contrast to the highly ornamented fabric of the original," said the architects.

"Separated by a century and a half, the two parts of Orama stand as beautiful expositions of the best construction standards of their day," they added.

Photography is by Sharrin Rees.