Students behind "the world's first solar-powered family car" have redesigned the vehicle to run for more than 1,000 kilometres on a single charge and produce enough excess energy to power a TV or washing machine (+ slideshow).

Stella Lux, a wedge-shaped car with solar panels fitted to its sloping roof and rear, can run for 1,000 kilometres (621 miles) on a single charge and carry four people.

Designed and built by students from Eindhoven University of Technology, it also includes a raft of technologies to make the car safer, faster and more energy efficient – including a geolocation system that helps drivers find the most energy-efficient route.

Its name is taken from Solar Team Eindhoven's first vehicle, Stella, which was designed and built in 2013 to take part in the World Solar Challenge – a biannual 3,000 kilometre race through the Australian outback from Darwin to Adelaide.

"Solar Team Eindhoven has set itself the goal of developing the car of the future," team manager Tom Selten told Dezeen. "By combining the aerodynamic design with lightweight materials like carbon and aluminium, the Eindhoven student team has once again come up with a very energy-efficient design." 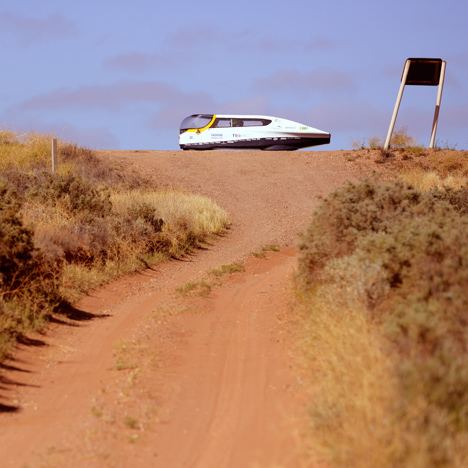 After winning the 2013 World Solar Challenge with Stella – which they described as "the world's first solar-powered family car" – the student team set itself the aim of winning for a second time, with a faster, more efficient and practical version of the design.

To reduce the amount of energy needed to propel the car forward, the team redesigned the body to include an air tunnel that reduces the vehicle's wind-resistance, making it able to travel faster with less power.

The roof has been enlarged to include more solar panels for powering the car's motor, and lighter materials like carbon and aluminium have been used wherever possible.

"The tunnel on Stella Lux ensures our frontal area is minimised while the extended roof ensures we can add two extra strings of solar cells," explained team manager Tom Selten.

"On balance, Stella Lux generates more energy than it uses, which makes it energy-positive," continued Selten. "Excess energy can be returned to the power grid, helping to deal with societal problems relating to the use of energy."

Selten believes the design offers a practical solution to resource depletion and offers a glimpse into a future in which all solar-powered cars would generate enough energy to run home appliances.

"Imagine yourself driving towards your house, it automatically connects to your house (via wireless inductive charging) and knows, based on our agenda, whether it can discharge itself," said Selten. "The energy which is produced by your car can then be used to to watch TV or for your washing machine."

The team developed a navigation system specifically for Stella Lux. Solar Navigator allows drivers to choose whether they'd like to take the fastest route or the most energy-efficient route. The technology assesses the weather, average speeds and likely energy usage on any given route and feeds the information to the driver via a display screen in the cockpit.

Stella Lux is connected to the internet and other road users via a car-to-car communication system called Car2X. Sensors placed on multiple vehicles communicate precise locations to form a real-time traffic overview, which can be used to reduce the likelihood of collisions or automatically turn in-car music down when an emergency vehicle like an ambulance is approaching.

To improve comfort and driver safety the team also integrated a heads-up display that projects information onto the windscreen, minimising the driver's need to take their eyes off the road.

"By deciding to further improve on our solar-powered four-person car, we're once again aiming to win [the World Solar Challenge] while at the same time proving that this energy-positive family car offers a viable future scenario," said Selten.