Shipping containers are often repurposed to create buildings, and this structure by Tel Aviv studio Potash Architects features one container balanced at a precarious angle (+ slideshow).

Named Shipping Container Terminal, the building provides offices and technical facilities at the Port of Ashdod – one of Israel's two main cargo ports, located about 40 kilometres south of Tel Aviv. It also houses an events space.

Potash Architects wanted the building to reflect its industrial seafront location, so chose to construct it from shipping containers – the large steel boxes used for moving products and raw materials between countries.

Various architects have experimented with these containers, by perforating them, turning them on their sides, or piling them in unusual configurations. But the approach taken here was to angle one of the containers to create a focal staircase.

"The inspiration was drawn by the way containers are stacked across the facility," explained project architect Sivan Joseph. "We wanted to extend that narrative and add some playfulness to differentiate it from its surroundings and accentuate the recreational function of the building." 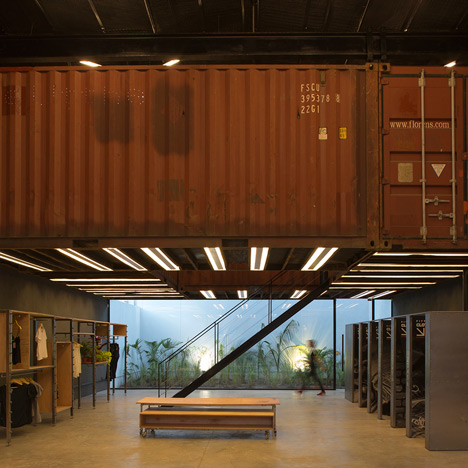 Shipping containers are suspended above shoppers inside Le Utthe boutique

"It also made a lot of sense from a sustainable standpoint because in this particular project, used shipping containers were an abundant resource."

The staircase container is positioned at a 30-degree angle, with a scissor stair – which doubles back on itself – slotted inside. Three of its steel walls were replaced with glazing, while additional structural supports were added at the two main stress points to hold it firmly in place.

The rest of the building is made up of six containers. Four on the ground floor accommodate the events space on one side, and offices and tech rooms on the other. The remaining two host more offices above. There are toilets on both levels.

"The slender proportions of a shipping container required us to join them in various ways to create the needed functional office spaces and halls," added the architect.

Another feature is a reinforced concrete shelter that bridges two of the containers. The Israeli Home Front Command stipulates that all new buildings contain one, so a custom-sized casting mould was prepared as part of the project.

Back in 2010, Korean design office AnL Studio experimented with angled shipping containers for a seaside observatory in Incheon. More recently, London architect James Whitaker proposed a low-cost studio made up of containers that point to the sky.

Photography is by Lior Avitan.