A balcony shaded by steel fins projects from the upper storey of this house in Northern Ireland, which architect and farmer Patrick Bradley built using four used shipping containers (+ slideshow).

Patrick Bradley developed Grillagh Water House for a picturesque site on his own farm near the town of Maghera, taking advantage of local legislation that allows farmers to build dwellings on their land. 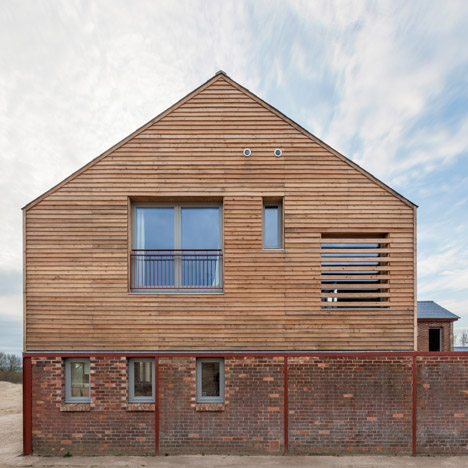 Having originally designed a house that employed conventional construction methods, the architect realised that he needed to reduce the cost to meet his budget, and instead came up with an alternative solution.

"I didn't want to change the idea or the aesthetics of the design but I had to come up with an alternative that was more affordable and that's where the idea for shipping containers came from," Bradley told Dezeen.

The construction of the property was documented last year on British television show Grand Designs, which Bradley said has led to several thousand emails including requests to design houses in dozens of countries around the world.

The containers were purchased in the town of Bangor and trucked to the site, before being assembled around a steel framework.

Two of the metal boxes extend from the entrance at the end of a gravel lane. They both sit on top of the other pair of containers, which nestle in a perpendicular orientation in the lee of a gentle slope.

The upper level cantilevers over the lower storey, culminating in a balcony surrounded by steel fins that protect the interior from unwanted solar gain.

The stacked formation of the metal boxes also creates space on top of the lower portion for a terrace, surrounded by a glass balustrade and connected to the garden below by a minimal metal staircase.

"Even though it's a house made out of containers I didn't really want it to look like a house or like an idea of a farm building," added Bradley, who cited Frank Lloyd Wright's iconic Falling Water house in Pennsylvania as inspiration.

"I actually wanted it to act like a sculpture in the landscape but still blend in with its surroundings."

To ensure the building complements the forms and colours found in the local area, the containers on the upper level are clad in grey powder-coated expanded metal sheets, while the lower portion is covered in panels of pre-rusted Corten steel.

"This is a very rural part of Northern Ireland so I tried to use materials that are common in the area," explained Bradley.

"The grey colour is similar to many of the agricultural buildings around here and the Corten steel cladding was used to blend in with the landscape and the rock that was already on the site."

To make the containers habitable, they were insulated and weatherproofed to prevent the build-up of condensation that could cause the metal surfaces to rust.

The entrance on the upper level opens into a corridor. This leads past a galley kitchen to an open-plan living and dining area, which looks out across Bradley's farm through full-height windows.

A staircase between the kitchen and living space descends to the lower floor, where a window frames a view of the rocky earth.

"The way the house is designed with two levels creates an open space on the top floor that makes the most of the views and then the lower two containers provide a more private and intimate space," the architect said.

"The idea was to create a completely different atmosphere between the two levels."

At the bottom of the stairs is a screen that opens onto a bathroom with a suspended hammock-like bathtub.

One end of this level is occupied by a bedroom with a sliding glass door. It faces out onto fields, as well as a water trough that creates a boundary to stop livestock from coming up to the house.

This level also accommodates a boot room and the master bedroom, which is concealed behind a hidden door and features an en-suite bathroom with an open shower area.

Photography is by Aidan Monaghan.