"There are several battles that need to be won and several frontiers that need to be expanded in order to improve the quality of the built environment and consequently people's quality of life," said Aravena, who is based in Santiago, Chile, and is best known for his work with his firm Elemental.

"This is what we would like people to come and see at the 15th International Architecture Exhibition: success stories worthy to be told and exemplary cases worthy to be shared where architecture did, is and will make a difference in those battles and frontiers," he added.

The 15th annual architecture exhibition in Venice will be open to the public from 28 May to 27 November 2016 and occupy the Arsenale and Giardini venues in the east of the Italian city, as well as a number of smaller satellite spaces.

"The 15th International Architecture Exhibition will be about focusing and learning from architectures that through intelligence, intuition or both of them at the same time, are able to escape the status quo," said Aravena. "We would like to present cases that, despite the difficulties, instead of resignation or bitterness, propose and do something. We would like to show that in the permanent debate about the quality of the built environment, there is not only a need but also room for action."

Aravena's approach is a sharp contrast to that of the 2014 Venice Architecture Biennale director, Dutch architect Rem Koolhaas, who chose to "disconnect from contemporary architecture" in favour of his research-focused Fundamentals theme for the event.

Related content: see all our coverage from the 2014 Venice Architecture Biennale

"After the important experimental Biennale developed by Rem Koolhaas, dedicated entirely to the curator's research, it is our belief that we must follow up with a Biennale that convenes the architects," said Paolo Baratta, president of the Biennale.

Baratta said Aravena was the best architect of a new generation to examine the growing gap between architecture and social need.

"This Biennale intends to react once again to the gap between architecture and civil society, which in recent decades has transformed architecture into spectacle on the one hand, yet made it dispensable on the other," he said. "Among architects of the new generation, Alejandro Aravena is, in our opinion, the one who can best describe this reality and highlight its vitality."

Aravena, 48, is best known for his social housing work with Elemental – a "Do Tank" he founded in partnership with the Chilean Oil Company and the Pontificia Universidad Católica de Chile to tackle social issues in South and Central America.

Elemental's 2004 Quinta Monroy, a 93-home residential development in Chile created to provide houses for a community that had previously occupied the same site illegally, helped Aravena win the Silver Lion for a Promising Young Architect in the International Exhibition at the Venice Architecture Biennale in 2008. Based on traditional row houses, each building on the site was designed as a basic concrete structure, with a void incorporated to allow the residents to adapt and extend their homes themselves.

The firm's monolithic concrete Innovation Center UC – Anacleto Angelini on the campus of the Universidad Católica de Chile, in Santiago, was named one of the 2015 Designs of the Year by London's Design Museum. 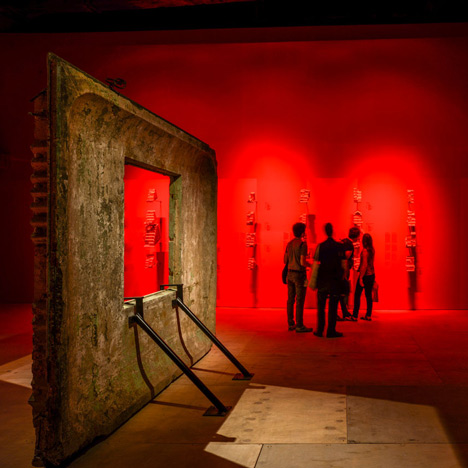 Aravena also runs his own architecture firm, founded in 1994, and has previously been a professor at Harvard University and a juror for the Pritzker Prize – architecture's most prestigious award.

His other projects include a viewpoint pavilion for the Mexican pilgrimage route La Ruta del Peregrino, a strap designed to wrap around the body of a sitting person and provide support without using a chair, and a prototype house at the Milan Triennale in 2008.