A root system sprouts from the concrete foundations of this house installation that dangles from a crane above a construction site in Germany.

Argentinian artist Leandro Erlich suspended the model house, called Pulled by the Roots, above the construction site for a new underground tram system in the southern German city of Karlsruhe.

The installation is designed to challenge the residents' perception of the construction works as an "eyesore" and to act as a reminder that "underneath the tons of metal and concrete of our cities, a vital organic presence remains."

Roots affixed to the base of the structure create the illusion that it has been torn away from its plot like a tree. 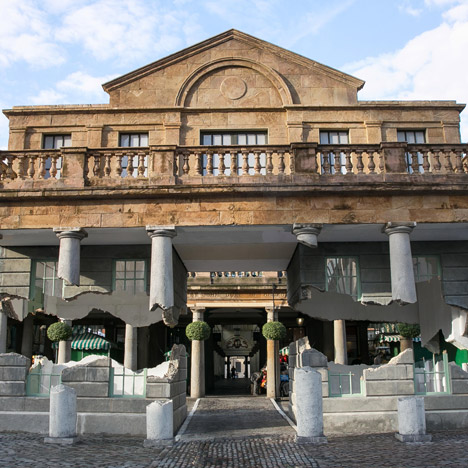 "In the modern era, we are tempted to see human innovation as inorganic and divorced from the natural world," said Erlich. "The speed of technology and the increasingly virtual dimension in which many of us we live only encourages this tendency to separate our inventions from the earth that sustains us."

"Pulled up by the Roots highlights this tension. As living beings on an ever-changing planet, we can never be apart from the organic world; the architecture that we create is part and parcel of our environment."

The installation is part of the summer festival The City is the Star – where a series of hyperreal sculptures have been installed across the city including a truck with its rear wheels parked on the facade of a building.

"Karlsruhe's citizens have seen their sidewalks disrupted and intersections re-routed; large cranes have become a dominant figure in the cityscape," said the artist.

"As we consider our impact on the natural world, climate change and the fate of the oceans, this piece reminds us that human culture and nature are intimately linked."

Erlich's past works include an installation in east London where visitors to a replica facade of a house laid out on the ground were reflected in a huge mirror to create the illusion that they were hanging from windows and scaling walls.

Fellow installation artist Alex Chinneck has also worked with urban architecture to create optical illusions, including a building that appears to levitate and a house with a slumping brick facade.

Pulled by the Roots continues until 27 September 2015.

Photography is by Leandro Erlich Studio.