Zaha Hadid has completed a museum for renowned climber Reinhold Messner at the top of Alpine peak Mount Kronplatz, featuring underground galleries and a viewing platform cantilevered over a valley (+ slideshow).

The Messner Mountain Museum Corones is the final instalment in a series of six mountaintop museums built by Messner – the first climber to ascend all 14 mountains over 8,000 metres and to reach the summit of Mount Everest without additional oxygen.

Located 2,275 metres above sea level, in the heart of the popular Kronplatz ski resort in South Tyrol, Italy, the building will exhibit objects, images and tools that tell the story of Messner's life as a mountaineer.

London-based architect Zaha Hadid – already in the news this month after her design for the Tokyo 2020 Olympic stadium was scrapped – designed a structure built into the side of the mountain, emerging only at certain points to offer specific views.

"The idea [is] that visitors can descend into the mountain to explore its caverns and grottos, before emerging through the mountain wall on the other side, out onto the overhanging terrace with its spectacular, panoramic views from Zillertal Alps in the north to the Dolomites and South Tyrol," she explained.

Three large volumes appear to burst through the rockface, each featuring softly curved forms made from glass-reinforced fibre concrete. 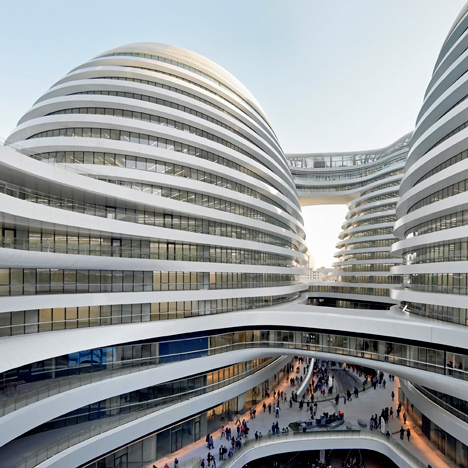 The first two form picture windows, framing views of the Peitlerkofel and Heiligkreuzkofel mountains, while the third is a balcony that projects out by six metres, offering visitors a view west towards the Ortler range.

More concrete forms emerge from the ground to create canopies that frame the building's entrance.

Zaha Hadid's firm chose cast concrete to give the appearance of rock and ice shards, referencing the geology of the region.

The walls of the building are between 40 and 50 centimetres thick in order to support the structure from the pressure of the surrounding earth, while the roof has thicknesses of up to 70 centimetres.

Inside, galleries are organised over three floors, connected by staircases that the firm described as being "like waterfalls in a mountain stream".

Zaha Hadid first unveiled the design for the Messner Mountain Museum Corones in 2013 and it opened to the public last week. It joins five previously completed museums dotted throughout the Dolomites, including one created by EM2 Architekten in the 13th-century Castle Bruneck.

"The museum is a mirror of the world of my childhood – the Geislerspitzen, the central buttress of the Heiligkreuzkofel (the most difficult climb in my whole life) and the glaciated granite mountains of the Ahrn Valley," Messner said in a statement.

"On Kronplatz I present the development of modern mountaineering and 250 years of progress with regard to the equipment," he explained. "I speak of triumphs and tragedies on the world's most famous peaks – the Matterhorn, Cerro Torre, K2 – and shed light on alpinism with the help of relics, thoughts, works of art, and by reflecting the outside mountain backcloth in the interior of MMM Corones."