This shelter for the remains of a Roman villa in Gloucestershire, England, is wrapped in slats of untreated larch so that it will blend peacefully into the landscape over time (+ slideshow).

The 40-metre-long shelter was designed by Feilden Clegg Bradley Studios to improve preservation and provide better access to Chedworth Roman Villa, a 1,800-year-old ruin in Gloucestershire that is managed by conservation organisation the National Trust.

It enables a stretch of ancient mosaic floor along the villa's west range to be viewed by the public for the first time.

The larch that wraps the building's exterior was sourced from the National Trust's managed forest in Ashridge, Hertfordshire. 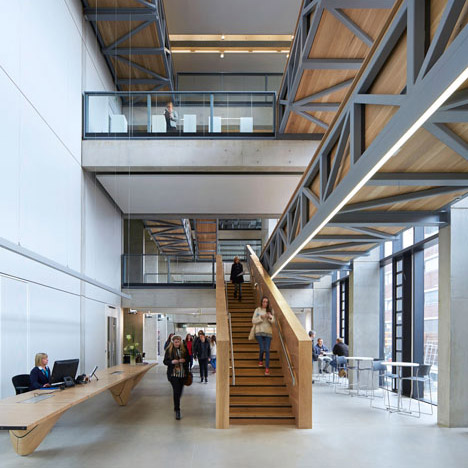 "The site's rural setting, coupled with our unshakeable conviction that the Roman archaeology should remain the star of the show, inspired our formal and material approach to the new building," said the architects.

"As time passes, the building will become more like an extension of the surrounding forest."

Chedworth Roman Villa was discovered in 1860 when a dog digging for a ferret brought up mosaic fragments to the surface.

It was subsequently turned into one of Britain's first public heritage sites, and remains one of the most complete and most visited domestic Roman ruins in northern Europe.

Previously, two Victorian sheds sheltered the bathhouse and dining room at either end of the villa's west range, but the mosaic corridor between them was covered in tarmac, and plastic tents erected for emergency protection had begun to dominate the site.

"The Victorian sheds had failed to arrest the processes of decay, and access for visitors was limited to those who were able to climb the timber steps to catch glimpses of the remarkable archaeology through small windows," said the architects, whose other projects include a mobile artist's studio covered in charred timber and an extension to Manchester School of Art.

The new shelter covers the entire length of the west range, providing ramped access to a metal walkway suspended from the ceiling joists, which guides visitors from one end to the other.

"The design pushes the boundaries of the conventional museum typology by allowing visitors to walk only inches above the floor mosaics," said the architects. "This creates a uniquely intimate experience of archaeology, which is more conventionally viewed from afar."

The shelter was designed to rest lightly on top of the ruin's walls, with sections of the timber frame arranged to distribute weight evenly across the structure.

"It involved a careful balance between designing a lightweight timber-framed structure, and building in enough self-weight to keep the building on its base in strong winds, without the need for anchor fixings down into the Roman walls," project architect Matt Somerville told Dezeen.

"Building directly on top of the Roman walls was central to our approach. We didn't want to follow the approach taken with many other Roman villa sites, where an all-encompassing shelter displays the archaeological remains primarily as an artefact, like an object in a display case."

The front facade is covered in slatted timber screens that slide open to bring in light and views, with timber battens angled towards the north and placed closer together at the lower level to protect the mosaic floor from direct sunlight.

To avoid the use of heavy machinery on site, all elements of the building were prefabricated and delivered as a kit of parts, which were assembled by hand, with the help of temporary hoists and tracks. The frame was erected in four weeks, and the rest of the building was completed in 11 months.

The modular construction is also intended to make the building easier to de-mount or adapt in the future.

"Working on a building this old leaves you in no doubt you are working on one time-limited phase in its history," said Somerville.

Feilden Clegg Bradley Studios has designed a second, similar shelter for the villa's north range, but is waiting on funding to build it, Somerville told Dezeen.

"There's still a great deal of archaeology to be revealed, and our building should be readily adaptable and extendable to deal with this," he said.

The £2 million project also includes a new learning shelter and a refurbished reception building, as well as a borehole that provides drinking water and a rainwater harvesting system for flushing toilets, which was necessary because of the site's remote location away from water pipes.

Photography is by John Dawson unless otherwise stated.