Launching in the UK for the first time in September, Urquiola's Salinas range is influenced by the kitchen in her grandfather's house and is based around matt-black metal frames.

These are used to form low units, wall brackets and overhead cupboards, as well as "trenches" along the backs of the units that incorporate plug sockets and hide appliance wires to keep surfaces as clear as possible.

"Based on the idea of a 'hidden machine', the design introduces an integrated trench that discreetly stores all the technical parts of the kitchen – electrical, plumbing, etc., while providing extra storage space," said a statement from Boffi.

Open shelves can be hooked onto the wall brackets, or used as a replacement for closed cupboards beneath the countertop. 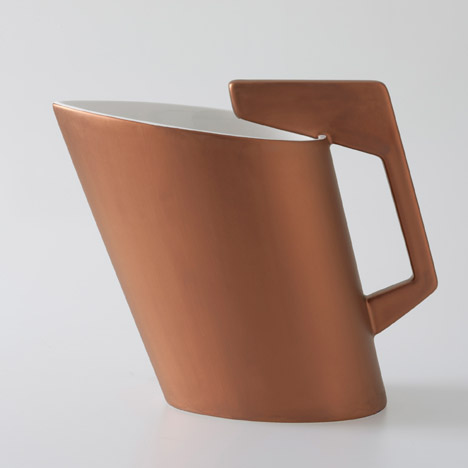 Wooden surfaces sat on top of the counters project out to form small tables or long breakfast bars, while large sinks and electric hobs can be placed within the worktops.

Urquiola – one of Spain's most sought-after contemporary designers – previously told Dezeen why she rejects "very masculine" kitchen design in a video interview.

"For me it's not a monumental place, it's a place where you can be together in some way," she said.

The Salinas system is named after a town on the coast of northern Spain where the designer spent time as a child at her grandfather's home.

"Salinas is the beach of my childhood; a long sandy beach with dunes along the Bay of Biscay, Asturias, with huge, crashing waves and intense colours," said Urquiola, who has already launched a collection of iridescent glass furniture and a cushioned outdoor chair this year.

"The kitchen in my grandfather's house, which commanded a view of that very beach, brings back fond memories of those moments."

Urquiola worked with Boffi's research and development team to create the surfaces for worktops and doors.

A range of metallic finishes including zinc, brass, copper and aluminium can be paired with industrial glass, lacquers and textured concretes.

Boffi will present the collection alongside the Antibes wardrobe system by Italian designer Piero Lissoni, which comprises an aluminium frame and surfaces in matt lacquers or wood veneers.

The products will be on show during the London Design Festival, which will take place from 19 to 27 September 2015.

Elsewhere in the city, an exhibition will present Norwegian design while installations will include an electricity pylon turned on its head and a courtyard filled with mirrors.