Israeli designer Ezri Tarazi has created a series of nine tables based on the cultural, religious and geographical diversity of Jerusalem (+ slideshow).

Tarazi's Jerusalem Tables are each shaped like the same map of the walled Old City – a UNESCO World Heritage Site that has had a turbulent history. The tables present different information about the area using forms and materials.

With a surface comprising 20 sections of typical Jerusalem objects made from materials including leather, glass, pottery and copper, the Divided City table opens into two parts.

"The table's design reflects the geopolitical situation of the divided city of Jerusalem," said Tarazi. "When the table is closed it emphasises the beauty of the city as a whole consisting of many multi-faceted parts."

The Bars table is made of a series of glass-covered decorative iron bars made using laser cutting technology. These reference the decorative metal lattices that cover doors and windows around Jerusalem.

"The houses of the Old City, like many public buildings in Jerusalem, commonly have bars across the doors or windows that are embellished with symbolic ornamentation, decorations, and texts with different meanings," said the designer. "Different styles side by side in a single building provide evidence of the range of cultures in the city." 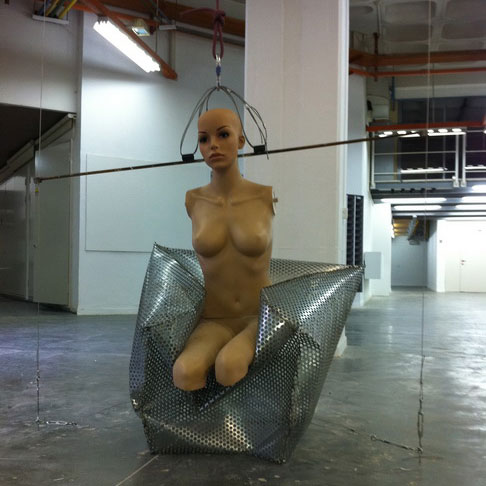 The black oxidised-iron Gush Bloc table is a geometric abstraction of the map. The base is narrower than the top, and despite its solid appearance, the table weighs just 15 kilograms.

"When the table is viewed from below, it seems to be in an upward thrust, from the earthly level of the city to its heavenly level – a visual depiction of the 'Heavenly Jerusalem'," said Tarazi.

A series of wheel-turned bowls penetrate the metal surface of the Dirt from Your Earth table. The bowls are made of porcelain clay mixed with soil from the excavations of Temple Mount – a celebrated and contentious religious site in the Old City of Jerusalem.

"The table's design reflects two issues," explains the designer. "One is the political-religious issue, signified by the origin of the raw material – a controversial historical and archaeological site. The other is cultural – the tradition, common in Mediterranean countries, of providing refreshments in numerous small bowls."

Data from the map of the city was translated with the use of a Voronoi diagram – a method of mathematical calculation based on partitioning a plane into polygons. The map was first converted into a two-dimensional diagram and then into a model produced with a 3D printer, and suspended on red powder-coated metal legs.

"The Voronoi table's design was inspired by the demographic changes anticipated in the Old City regarding the population's growth and trends in its segmentation," said Tarazi, who has previously formed a chair by dropping a concrete-filled mannequin onto a mesh box.

The Dressed Stone table is made from Jerusalem Stone. The upper part of the table was mechanically cut and polished – resulting in a smooth finish – whereas the lower part was cut by hand and has a more coarse texture. The table was made at the Jerusalem Limestone factory, which provided stone for Israel's Supreme Court, the Foreign Ministry, the Temple Mount Plaza, and the Hurva Synagogue.

The table contains 12 copper-lined cavities for copper-based glass coffee cups and one for a coffee pot. A cup placed in one of the cavities completes an electric circuit, activating a musical "loop".

Each loop causes a different sound to be produced by a single musical instrument. "The table emphasises the complex beauty of a joint group creation," said the designer.

A projector above the Remapping table is connected to a three-dimensional sensor, which detects moving objects in the space surrounding the table. Any movement over the table causes the buildings on the map projected onto the surface to regroup, creating a new map.

"This optical mechanism depicts the city as a dynamic place, subject to frequent changes that are often caused by the different populations making up the human fabric of the city," explained Tarazi.

Finally, the Excavations table resembles a model of an archaeological site – many of which can be found around Jerusalem, initiated by different political and religious factions. "The form of the table resembles an abandoned futuristic mine, portraying the dystopian world of a city that has been totally abandoned after being completely excavated," the designer said.

The nine tables are on display alongside functional items and humorous sculptures by fellow Jerusalem-born designer Haim Parnas, as part of the Objective exhibition at the Tower of David Museum in the city that runs until December 2015.