The reflective stainless steel skin of the new Len Lye Museum in New Plymouth, New Zealand pays tribute to the work of the experimental artist known for his kinetic and multimedia pieces.

Designed by New Zealand-based Pattersons Associates, the building is clad with locally sourced stainless steel. The folded surface reflects and refracts its surroundings, changing its appearance throughout the day and the seasons.

This effect draws parallels with the work of the late artist. Born in Christchurch in 1901, Lye was a pioneer in video art, making films by scratching and painting on celluloid.

He is also well known for his kinetic sculptures, many of which move or bend with tiny variations in air flow.

"The shimmering, iridescent colonnade facade, manufactured locally using stainless steel – Taranaki's 'local stone' – links both Lye's innovations in kinetics and light as well as the region's industrial innovation," said studio principal Andrew Patterson. "By doing this we celebrate the fortunate gift of his works to Taranaki."

Gaps between the folds in the facade allow a controlled amount of light through, creating an internal space that the architect describes as being like a colonnade. 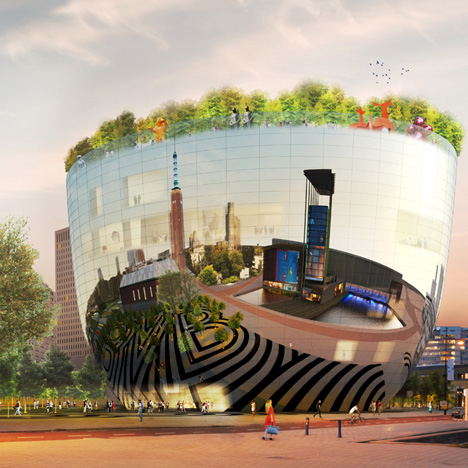 These gaps create varied shadows on the folded concrete walls inside, which mimic the shape of the metal skin.

"Light is drawn inside through the apertures in the colonnade, and these create moving light patterns on the walkway, perhaps a form of passive kinetic architecture," said Patterson.

Behind the facade, the museum comprises a series of volumes connected by bridges. Galleries of various sizes and viewing rooms are distributed over four levels, and are interspersed with educational and archive spaces.

Many of the rooms open onto or overlook large voids in the building and are connected by catwalks or ramps, creating a complex spatial sequence for visitors.

The building adjoins the existing Govett-Brewster Art Gallery and will operate in tandem. The two buildings share a single entrance, as well as staff and management facilities, an education suite, some exhibition spaces, a cinema, a shop and a cafe.

The museum is the first in New Zealand dedicated to a single artist. Although Lye spent most of his working life in New York, he is considered one of the country's most important contemporary artists.

He was also a painter and writer, and his works feature in the permanent collections of the Museum of Modern Art, the Art Institute of Chicago, and numerous other major institutions.

"We were thrilled to be offered this commission, Len Lye is an inspirational figure who bridged a multitude of creative disciplines," Patterson said.

"This building is about amplifying his work by physically representing the partnership that he identified between art and architecture."

Funding for the museum was received from external sources as well as council budgets.

Photography is by Patrick Reynolds.