Bureau de Change Architects gave this north London house extension a pleated ceiling to create the illusion it has been squashed onto the rear of the brick terraced property (+ slideshow).

Bureau de Change Architects, which was co-founded by Katerina Dionysopoulou and Billy Mavropoulos, positioned the extension in the sunken garden at the back of the house.

The zigzagging surfaces of the ceiling and walls give the impression that the structure buckled when attached to the existing brickwork.

"The focal point of the project is a pleated roof at the back of the house, which appears to be formed from a flat surface, forced to crinkle up into a faceted structure as it is pushed up against the exterior wall," explained the two architects.

"From the garden, the pleats are purposefully sunk from view, creating the impression of a simple flat roof, which allows the character of the original building to stand out."

As well as expanding the existing kitchen and creating new dining and working areas, the extension – named Folds House – opens up views into a neighbouring conservation area called Parkland Walk. This ribbon of parkland occupies a disused railway line between Highgate and Finsbury Park.

Large panels of glass set into the zigzagging ceiling and rear wall of the extension look out into a secluded garden and the treetops of the park.

"The poise of the roof offers natural points for the placement of generous skylights, bringing light into the living area, which would otherwise be shrouded by its position in the centre of the house," said the architects. "Importantly, these openings also satisfy the owners' desire to see the nearby woodland while relaxing in the space."

The pleated plasterboard ceiling runs over the dining area and is formed from a series of steel and timber beams, which also support the floor above to create a column-free space. The unusual outline of this portion of the ceiling is emphasised by contrasting midnight-blue and stark white paintwork.

This ceiling form is replicated in a retractable timber wall that conceals a small home office and cupboards to one side of the kitchen.

The kitchen floor and a pair of steps that lead into the sitting room and hallway of the original residence are covered in pale grey terrazzo. 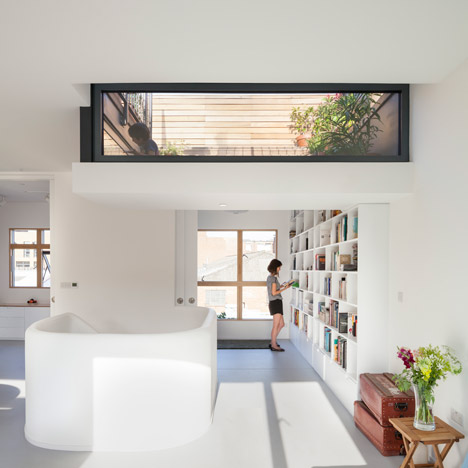 "Materials and colours were carefully proportioned and distributed to visually mark the transitions between living spaces and to create a natural circulation," said Mavropoulos.

"Large terrazzo slabs, encaustic tiles and tonal parquet complement the complexion of the original building, while enhancing the graphic impact of the angular extension," Mavropoulos added.

Dionysopoulou and Mavropoulos recently created a new showroom for online homeware retailer Made.com in London's Soho, while elsewhere in the capital they have merged a pair of terraced houses to create a new residence.