Zaha Hadid Architects has won a competition to design a 920-metre-long bridge across the mouth of the Tamsui River in the Taiwanese capital.

Billed as "the world's largest asymmetric cable-stayed bridge with a single tower", the Danjiang Bridge will be supported by just one 175-metre-high concrete mast to reduce its visual impact on the Taipei skyline.

Its steel deck will create a new route for cars, trains and pedestrians, easing congestion on existing transport networks.

Zaha Hadid Architects – which has previously completed bridges in Spain and Abu Dhabi – is partnering with engineer Sinotech Engineering Consultants and master builder Leonhardt, Andrä & Partner on the project.

Conceived as part of a wider upgrade of infrastructure in northern Taiwan, the bridge will connect the urban centres of Tamsui to the east and Bali to the west, linking Highways 2 and 15, with the West Coast and the Bali-Xindian expressways. 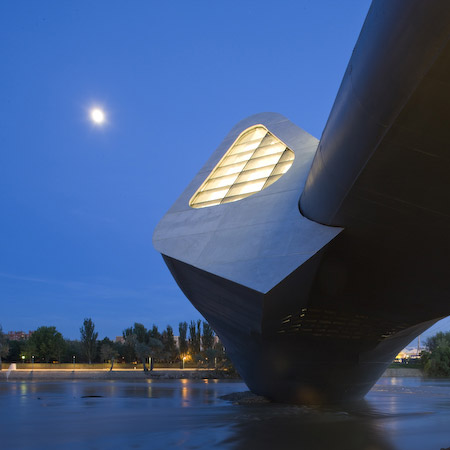 It will allow the Danhai Light Rail Transportation (DHLRT) system to extend, joining Taipei's public rail network with Bali and the Port of Taipei – the region's busiest shipping port.

"By reducing traffic from the congested Guandu Bridge upriver, the Danjiang Bridge will greatly improve the northern coast traffic system and enhance accessibility throughout the region," said Zaha Hadid Architects.

The firm claimed the bridge's single concrete mast will have a minimal impact on the estuary, which has become a popular spot for tourists watching the sun set over the Taiwan Strait.

"The mast is designed and engineered to be as slender as possible and positioned to offer the best structural performance, avoid impeding the navigability of the river and also minimise any interference with the views of the sunset from popular viewing points along the river," said Hadid's team.

"This single-mast design also minimises structural elements in the riverbed in accordance with the increased protection programs of the estuary's ecosystems," it added.

Danjiang Bridge would become Zaha Hadid Architects' first completed project in Taiwan. Other recent projects in Asia by the firm include the pebble-shaped Wangjing Soho towers in Beijing and the Dongdaemun Design Plaza complex in Seoul.

However, practice director Patrik Schumacher recently told Dezeen the firm is looking to work more in America at the moment because of the backlash against foreign architects in China.

Animation is by MIR and Morean.