A grid of near-identical doors and windows punctures all three visible facades of this seemingly cube-shaped house in Okinawa by architecture studio Rhythmdesign (+ slideshow).

Fukaya-based Rhythmdesign – whose past projects include a house where all rooms overlook the dining table – developed its design around a desire to offer adjustable conditions for every room in the building.

This led to the addition of numerous small windows that residents can easily open and close to create cross-flow ventilation in different rooms. According to the architects, these are small and simple enough to be operated by a child.

"We aimed to create a situation where the indoor environment can be controlled by our hands, and also works well in the tough climate of Okinawa," said the team. 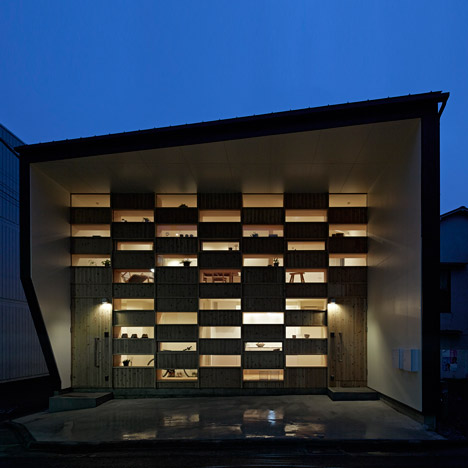 "In Okinawa, being open and protecting the interior environment are important."

The 192-square-metre building comprises a simple rectilinear volume that is square in plan and only slightly larger in height, so at first glance it appears to be a cube.

This effect is emphasised by the uniform window arrangement of windows and doors – 12 on each of the three facades – which are all sheltered by blocky canopies that extend out horizontally from the walls.

"In ancient days, people came up with various ideas to protect themselves from the heavy climate and keep their living environments comfortable," said the team.

"We aimed to create a house which cuts off intense sunlight and heat; is protected from rain and wind; and refers to traditions, styles and cultures in the area by reinterpreting them in a modern way."

The exterior of the house is concrete while the interior features wooden floorboards, as well as exposed timber ceiling rafters that run in alternating directions.

The main living and dining space occupies the middle floor, where a separate space behind the kitchen functions as a pantry and a traditional tatami space is partitioned off on one side.

One large bedroom is situated on the floor above, with a walk-in closet and an en-suite bathroom.

Other examples of residential architecture in Okinawa Prefecture include the Shinichi Ogawa-designed Minimalist House, which is divided lengthways into a courtyard and living space.