The pendant of this necklace by Swedish designer Katarina Hornwall can be used to carry tampons for those "in need of immediate menstrual assistance".

Made from solid aluminium and brass bars, the Emergency Tampon necklace pendant mimics the shape of a tampon so that one neatly fits inside.

"It is supposed to be a bit thought provoking," Hornwall told Dezeen. "I thought it would be interesting to let the tampon be a bit of a 'show off'."

She came up with the idea for the product after discussing the taboo surrounding sanitary products, and deciding that they shouldn't have to be hidden.

"While having a couple of beers, some friends and I came to discuss the tendency of feeling a bit embarrassed to ask a friend for a tampon, or hiding the tampon in your hand when going to the toilet," said the designer, who studied industrial design at Lund University. "Why are we embarrassed about tampons?"

Mounted on a thin chain, the metallic case is lathed and drilled by hand, while the shape of the domed tip is made with a computer numerically controlled (CNC) lathe. 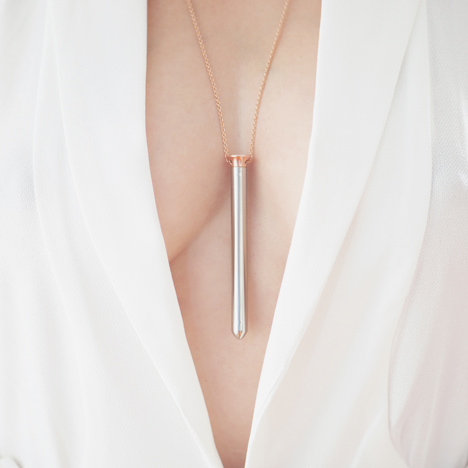 The necklace is also designed to prevent tampons from gathering dirt at the bottom of bags, as well as making one easier to access at short notice.

"Having loose tampons in a handbag usually gets the plastic foil that covers them dirty, so the case also function as protection from dirt," said Hornwall.

However, the necklace is not just for women. Hornwall's intention was to create a product that could be worn by both sexes.

"The aim has been to create a design that everyone can feel comfortable wearing," she said.

Photography is by Tove Larris.