Spanish furniture brand Missana has launched the Simone sofa, designed by Estudio Sputnik to reference a grand piano and named after the famous jazz and blues artist.

The quilted wooden-framed back of the Simone sofa sits elevated above the one-cushion seat by four metal rods – the two sections are upholstered in different colours to emphasise the separation.

"The sofa is characterised by being divided into two parts," Sputnik's Majo Fernandez told Dezeen. "We wanted the top part of the sofa to be read as an independent piece, more dynamic and colourful, as opposed to the seat, which is more static and flat."

Music plays a significant role the Valencia-based studio's design process, and the team listen to different styles of music while they work. In this case it was a grand piano and the music of jazz legend Nina Simone that found its way into the design.

"We think this sofa is directly related with the music, concretely a grand piano," said Maria de la O Reyna, another of the studio's three co-founders. "While we were sketching, we thought about the elegance of the curves like a soft melody, and how playing with this concept, we could create a piece that reminds you of a piano and one of the most important pianists in the world."

The designers explained that Nina Simone is a favourite in the studio and as the sofa developed, they felt it became more feminine in its form, with curves resembling those of a grand piano. 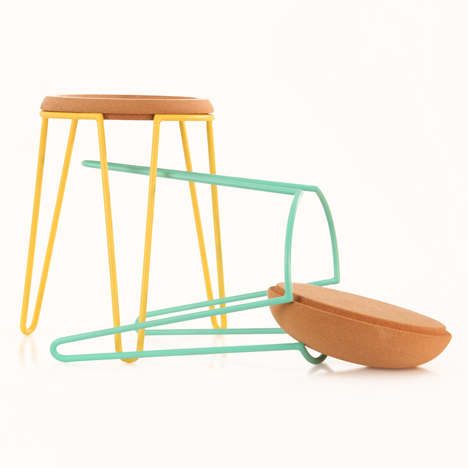 "We borrowed the name from Nina Simone as she is a sensual woman, with an exotic character and a very well known piano artist," said the firm's Mariola Reyna.

The Simone sofa is available is a wide range of fabrics from Danish brand Kvadrat and Dutch company Febrik. It has been designed so that it can be placed in the centre of a room, with equal attention paid to the back as the front.

"The design with the sinuous curves and form invites you to choose a place where you may be able to surround it," said the designers. "We try to take care with all the details and we have paid special attention on the two separated pieces, the joints and the back of the couch."

Estudio Sputnik launched its first furniture and homeware collection in 2012, which included a stool and table inspired by a Russian satellite that also leant its name to the studio.

Other celebrities that have influenced design and architecture projects include Beyoncé, whose Ghost music video provided a reference for the curvaceous form of a proposed Melbourne skyscraper.

Photography is by David Rodríguez and Carlos Huecas.