Opinion: the wedge – a form covered in grass and glass – has become an increasingly popular device for disguising architecture as landscape, says Alexandra Lange.

What is the wedge? In Washington DC it is a way to enter a pair of underground museums, without adding to the Smithsonian's existing potpourri of architectural styles. At Lincoln Center it is a way to camouflage a new restaurant on a famously flat plaza. In Baltimore it replaces a Brutalist multi-level fountain with a smooth singular surface for sitting. At Brooklyn Bridge Park it rears up to provide a selfie taking-point and amphitheater seating facing the borough. At the 11th Street Bridge Park, a set of wedges add topography to what could be a simple span across the Anacostia River. At Atlantic Avenue in Brooklyn it's the subway stop, looking like a fragment of the Barclays Center that broke off.

Whether the wedge is designed by BIG or Diller Scofidio + Renfro or Ayers Saint Gross with Mahan Rykiel and Ziger/Snead, or OMA/OLIN, or SHoP, or (in the 1990s, in the Netherlands) by Mecanoo or Sven-Ingvar Andersson, it looks pretty much the same. A rectangle or triangle of lawn stretched out of right angles and pulled gently upward at one corner by an invisible giant's hand. Into the maw below, glass is inserted like giant vitreous teeth, making a pavilion or a skylight or a wall of windows bringing light into the building.

Above, at least in renderings, young people lounge on a perfect swath of green, sometimes marked by sets of steps suggesting an amphitheater. Sometimes the angle makes the slanted surface accessible by wheelchair, sometimes it is a hill to climb. Sometimes it's just a show of greenery, like environmental wallpaper. Sometimes a giant skylight is exactly what a site needs.

The edge of the wedge is tricky

The edge of the wedge is tricky. You can render it as the thinnest of metallic lines, but in reality it needs to be a chunky section, incorporating railing, flashing, seals, a bed for the sod and wiring for irrigation and lighting. The illusion of effortlessness dissipates in that thickened zone and it starts to look like what it really is: a roof with neo-Modernist details.

The green topside is also tricky. Grass doesn't want to grow at an angle. The result is not the fabric-like swath of green you get in pixels, but patches and dustbowls, sabotaging the illusion of a connection to nature. BIG's Mantaray platform for Pier 6 in Brooklyn Bridge Park is covered in wood, with a meadow behind it on the flats – the press-release language tries to connect it to the ocean rather than the fields. Bjarke Ingels is said to have said: "Its namesake organic slopes and curves have been shaped by concerns for accessibility, safety, shelter, structure – like a manmade reef evolved to accommodate human life."

But this architect bullshit is telling. Ingels is smart enough to avoid the high-maintenance grass wedge, but he has to find another naturalist's rationale. The wedge can't be a platform, or a roof, or anything as clanky and manmade as architecture, because then it would have to be critiqued as a building. But the wedge is architecture that is trying to avoid identification as architecture. "Who me?" it says, "I'm just a lawn." Everyone likes lawns. Everyone likes reefs. Here's Ingels on the wedge entrances to the Smithsonian's Sackler Gallery and the National Museum of African Art: "It's almost as if the spaces underground open up and reveal themselves to the garden and to the Mall." There's no architect here. 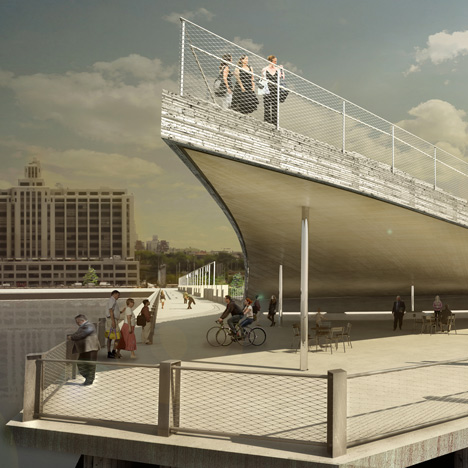 The wedge likes to be deployed, therefore, in difficult situations, where questions of style could wreck a project's chances and there's already a lot of assertive landmark architecture around. It was difficult enough for Lincoln Center to hire Diller Scofidio + Renfro to update their outdoor spaces; assertive contemporary architecture might have derailed the project.

Instead, many of their interventions (described by then-New York Times architecture critic Nicolai Ouroussoff in 2010 as "just a little nip and tuck") took faux-ephemeral form, from glass entrance canopies, to buried roads, to LEDs fitted to the steps. When it came time to redo a plaza that included a landscape by Dan Kiley, it was best to go low-key, using plain language, and planes of green, to top a new building. "The lawn warps up on two sides," Ouroussoff wrote, "so that climbing it can make you feel as if you were about to float off into the air on a carpet of green." There's no architecture here.

The wedge can also be a placeholder, a bridge between an objectionable past and an uncertain, unfinanced future. That's how it is being used in Baltimore, where the multi-level, poured-concrete McKeldin Fountain, built by Wallace, McHarg, Roberts & Todd as part of that city's Inner Harbor redevelopment in 1982, is set to be replaced with a wedge facing a wall of water. What was a place to explore would become a place to do very little. The first phase of the project includes only tearing down the fountain, not building the replacement. There's no architecture here either, just the desire for something, anything, with less character, less complexity, less design than the McKeldin Fountain.

The wedge has been around for 20 years, but has proliferated, unmoored from specific authorship, in the last two or three. Landscape urbanism, with its warped planes and multi-use surfaces, likes a wedge, as do architects who want to maintain control of turf from the landscape architects.

In this age of drought and flood, we need to make it more difficult to check the "grass" box when a geometric area of nature is called for. In a sense, it's an anti-landscape, as it has very little to do with real meadows or mountains, and is always a feat of engineering.

Let's stop acting like the wedge is not architecture, and look hard at how those floating, revelatory planes are made, how they disrupt, and how they are ageing. Let's also stop treating the wedge as style-free. Pulling up the earth (and filling the hole in with glass) is as willful and timely a gesture as slotting people into boxes in the sky. It's not magic, it's architecture, circa 2015.