Danish architecture studio CEBRA has won a competition to design an education campus in Irkutsk, Russia, which the firm described as "a new kind of school" (+ slideshow).

Six shortlisted architecture firms, including MVRDV, Sou Fujimoto and WORKac, were asked to develop a design that would encompass a pre-school, junior school and high school as well as cultural, leisure and health centres, which must be accessible to the public.

"The vision for the Smart School Project is to create a new type of school – a 'school park'," said the architects.

Rather than create a single block, CEBRA proposed arranging the facilities in a ring of connected buildings with overhanging eaves and a landscaped "meadow" in the centre. Together, the buildings create a total floor area of 31,100 square metres.

"By turning a string of individual buildings containing the main functions into a ring, the emerging central area becomes an interconnected space of cross-functional relations," said CEBRA co-founder Carsten Primdahl. 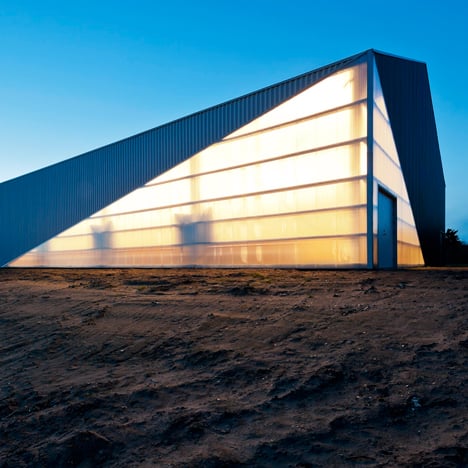 "At the same time, the gaps between the buildings along the ring make the meadow both visually and physically accessible from the outside, and allow for activities to diffuse between the meadow and the surrounding landscape," Primdahl added.

The circular green space is offset within the ring, varying the width of the band of buildings.

A white ridged roof will unite the structures, creating sheltered spaces in between. The varying heights of the ridges and sizes of the eaves are intended to indicate the different functions of the buildings.

"They divide the overall ring shape into smaller, easily understandable units that relate the volume to the human scale," said the architects.

"The ring is frayed at the edge, so to speak, so that the cantilevering roof in combination with the individual buildings' offset volumes creates a series of semi-covered niches, activity zones, learning environments and flow areas, which provide spaces for a variety of activities in the transition between building and landscape."

Although some of the spaces are fitting out to suit activities related to specific subjects like maths or science, the rooms are designed to be multifunctional, allowing teachers and students to move between different types of space according to their needs.

A part of the site will also contain a housing development for orphaned children attending the school to live with their foster families.

CEBRA won first place in the design competition, which was launched in February this year, and is now developing the scheme for construction.

CEBRA has a growing portfolio of education projects, including the recently completed Children's Home of the Future in Denmark, and an adult education centre with a design inspired by Mickey Mouse.