The London-based designer, who cites Memphis as a key reference, will present her latest range at the Aria design store in Islington.

"Forget Skandi-inspired minimalism, for London Design Festival this September Aria is injecting colour into London's concrete jungle," said a statement from the store.

Furniture designs and prints by Memphis Group members became synonymous with the Postmodern movement in the 1980s, and Walala's colourful and geometric patterns continue a similar aesthetic. 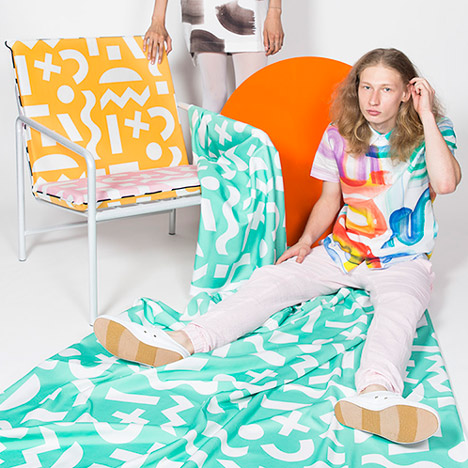 Her collection includes a range of cushions, printed with a colour palette that includes black, white, red, blue and green. Dots and dashes fill coloured blocks, while diagonal stripes and square grids add to the geometric designs.

On wall-mounted shelves, black edges frame similar patterns applied to the back surfaces.

Available in rectangle, square and triangle versions, the storage units can be hung individually or stacked up in sets.

A range of ceramics was created in collaboration with Stoke-on-Trent pottery company CoBaltum, while the furniture was made with artist and craftsman Dale Kirk.

Walala graduated with a degree in Textile Design from the University of Brighton in 2009 before setting up her eponymous studio in east London.

She has recently covered a building in Shoreditch with her signature prints, and will apply a similar treatment to the exterior of Aria's Upper Street store during the capital's design festival. Room settings that incorporate her designs will be installed inside the shop.

"Walala will be making her mark on both the interior and exterior of our store, as our corner plot of Upper Street becomes Walala's latest canvas for London Design Festival," Aria said.

The In Da House exhibition of her products will coincide with the festival – which runs from 19 to 27 September 2015 – with the official launch taking place on 22 September.

Design store Darkroom will also present a homeware collection with Postmodern influences during this year's event.

Dezeen has been exploring the return of Postmodernism in a summer-long series of articles, which includes in-depth stories about the movement's iconic building and products, as well as new examples of the controversial style.