A double-height space filled with rare vinyl records and magazines is the centrepiece of this music library and venue in Seoul, which was commissioned by credit card company Hyundai Card as a free space for its members (+ slideshow).

The Hyundai Card Music Library was designed by architect Choi Moongyu of Yonsei University and Seoul office Ga.A Architects, and the finishes and interiors were completed by global design firm Gensler.

It has a double-height library of rare vinyl records and magazines above ground, and two levels below ground: one with an underground stage that can host concerts for up to 500 people, and the other with three studios where musicians can practise and record demos.

A 14.5-metre-tall canopy wraps over the entrance, sheltering a more informal stage for buskers. Its underside is covered in an enlarged image by American photographer Bill Owens, showing a crowd watching the Rolling Stones at California's Altamont Free Concert in 1969. The image was selected and reproduced by French street artist JR, who is best known for pasting large-scale pictures of marginalised people in public spaces.

"This concert was a symbolic event of the 1960s hippie generation," said a representative for Hyundai Card. "JR chose this to look back to the history of music performances. This work reflects the free rock spirit of the 1960s, the ideals of hippie culture, and the message to freedom." 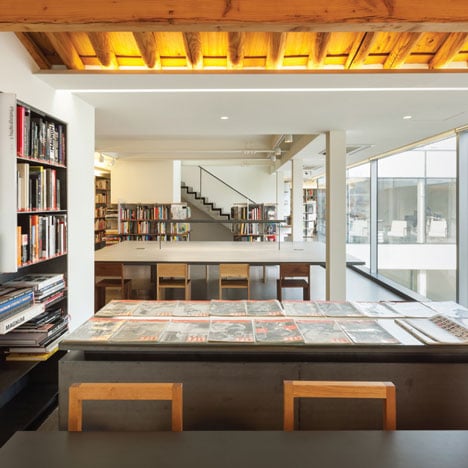 The facilities can be used by Hyundai Card holders, who are allowed to bring two guests each. The library has a collection of 10,000 vinyl records, with six turntables for listening, and 3,000 rare music publications, including the entire back catalogue of Rolling Stone magazine – from 1967 to present. Curators travelled to 11 countries over two years to source the collection.

Inside, a wall of the library has been lined with old stereo speakers, and the underground stage features a full-height artwork by Portuguese street artist Vhils.

This is the third themed library in Seoul by Hyundai Card, which is a subsidiary of Hyundai Motor Group, and has more than seven million members. The first was a dedicated design library which opened in 2013. The second – a travel library – opened in 2014. The company plans to open a food-themed library next, but has not yet set a date.

"By providing access to an enriched lifestyle, we build an emotional connection with our customers," said Hyundai Card spokesperson Woon Sik Min. "By offering new experience to our card members, we enhance our brand value."

Photography is courtesy of Hyundai Card.