A primary school building in Tel Aviv features a facade of perforated screens patterned with an image from a painting by Russian-born artist Marc Chagall – the school's namesake.

The school is named after Marc Chagall – a 20th century Jewish artist who specialised in stained-glass windows and large-scale paintings. Born in Russia in 1887, Chagall relocated to France in 1910 to develop his art and returned again after the second world war.

Some of his most famous pieces include windows in France's Cathédrale Notre-Dame de Reims and Metz Cathedral, and a painted ceiling in the Paris Opéra.

Studio founders Paola Liani and Itai Paritzki chose to incorporate influences and direct references from Chagall's work in their design. 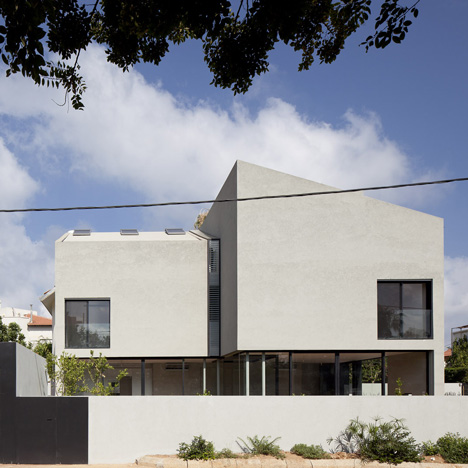 The building is split into two volumes – a main area with rooms organised around a small courtyard planted with elders, and a second section with wide, flexible classroom space.

The north-facing end of the main volume, which overlooks the main road, is clad with a screen made from perforated aluminium panels that shield the windows while still allowing natural light into the rooms.

These panels feature an image from a 1914 Chagall painting called Over the Town, which shows a couple seeming to fly through the air above a cluster of buildings. The image was recreated using a 3D pixel system, which identified areas of the aluminium that could be cut away using a computer-contolled machine to create the affect.

"Thirty optical panels of aluminum, of different measures and created for the painting thanks to the 3D pixel system, transform the colours of the image in many small shadows created by the peculiar shape of the panels' surface, making the image almost a hologram," said the architects.

"This creates an optical weave that changes according to the point of view of the observer or the different diffusion of artificial light during night."

On the west facade facing the existing school building, fins of coloured glass are fixed to the wall, below a row of clerestory windows. Thin steel cables connect the pieces of glass to the floor and provide a support for climbing plants.

"We thought that instead of using the 'classical' vitrage technique it could be interesting to see the effect of the oblique sunlight passing through the different colored glasses, painting the white plaster of the facade," the designers told Dezeen.

The colours of the panels are followed through inside in the flooring of the classrooms. The layout of the building was designed "as a microcosm of the city".

"The classrooms were designed as micro-flats and the volumes are like small houses of a Mediterranean town, joined in their common spaces by passages, small squares and unexpected gardens," said the architects.

Entrances to the building are provided by openings in the west and east facades and a covered staircase. Two external staircases with wooden treads and metal-mesh balustrades lead up around the courtyard to the two classrooms and a communal outdoor area on the upper floor, which also has separate bathrooms for boys and girls.

"The main feature of these stairs is to follow the path in a double and asymmetric way, both internally from the flight of stairs that fronts onto the patio, and from the main garden of the school," said the architects.

"This direct path, which leads from the exterior to the first floor is one of the main elements of the facade, which is oriented towards the old building and makes the visitor look at the sky," they added.

The ground floor also has two classrooms, as well as a teacher's room and another toilet. A basement level contains a safe room for missile and gas attacks, and a computer room.