Work from more than 30 Danish furniture designers is on display at the Øregaard Museum in Copenhagen, as part of the 2015 Cabinetmakers' Autumn Exhibition.

This year's exhibition theme is "petite", and designers were tasked with creating self-supporting furniture design that wouldn't exceed a maximum size of 60 by 60 centimetres.

"Petite means small in a graceful way," the Cabinetmakers' Autumn Exhibition organisation said in a statement. "Elegant in a classic sense and, best of all, sophisticated detailing. A cornucopia of possibilities, if you ask the designers and manufacturers."

"This year, the furniture is small, but the creative ideas are as big as ever – some even set new agendas in an attempt to push our technology-infused everyday life in a healthier direction."

The theme takes its cue from the architecture and heritage of the museum building, which was designed by French architect Joseph-Jacques Rameè in the early 1800s. Originally built as a summer house for the Søbøtker family, the building re-opened to the public as a museum in 1921.

"The museum is well suited for small, sophisticated furniture designs, which are petite in both a figurative and a literal sense," Mia Lagerman, chairman of the association, said.

"Petite designs are elegant, refined and carefully detailed, so the theme was a perfect choice for most of our members, whose work is driven by craftsmanship, both as designers and manufacturers."

The pieces in the exhibition have all been created by pairs of designers and manufacturers, with work from individuals and studios including TAF, Iskos-Berlin, Monique Engelund and Norm Architects.

Iskos-Berlin turned to traditional craftsmanship to create the handmade wooden Petit Pedestal, and Monique Engelund experimented with shadow in her Rise & Shine mirror board.

Norm Architects also provided exhibition design, using reflective metal podiums as a way of "contrasting and miming" the architecture of the museum.

"The homely setting of the museum is best suited for furniture in petite proportions," the studio said in a statement. 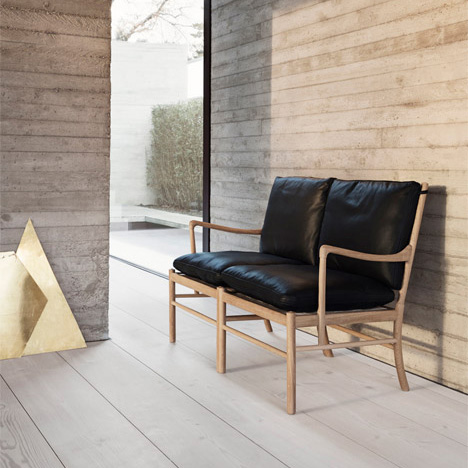 "Paying an homage to Donald Judd and using the reflecting surfaces of the podiums to interact with the museum's feminine interior, the exhibition displays all angles of the experimental furniture collaborations between manufacturers and leading Danish designers," the studio added.

The exhibition will remain at Øregaard Museum until 18 October 2015, before travelling to Maison du Danemark in Paris.

The Cabinetmakers Autumn Exhibition is a collective of 83 manufacturers and furniture designers that are brought together as part of an annual collaborative exhibition, held at a different venue each year.