Opinion: Vienna-based designer Talia Radford was among the volunteers who helped thousands of refugees passing through Austria over the weekend. In this piece for Dezeen, she calls on designers across Europe to find solutions for some of the practical problems caused by the crisis.

This weekend saw the biggest influx of asylum seekers into Europe since the Yugoslav war. As politicians were paralysed by their own policies, bigoting the responsibility onto each other, the population rose to step in and supply the refugees with the most basic of human needs: dignity.

An estimated 15,000 people walked from Hungary to Austria over the weekend, creating a humanitarian crisis. That's four people per second. Most of these people wanted to continue to Germany simply because nobody knows what this little Alpine country, a shadow south of Germany, is all about.

My name is Talia Radford, and I'm a Vienna-based product designer with a passion for technology but a love for people. My studio caters mostly to technology companies, but we have a policy of offering design services for little to nothing to organisations and companies tackling social issues. Normally we can afford to do this for one or two projects a year, depending on the scope. We do this because our discipline is curious and empathetic and compassionate by nature, and because the days where design was about chairs are long over. Design is about people.

Like hundreds of other Viennese, I felt there there wasn't really anything to do other than help

The sudden overnight change in the political climate last Saturday meant that Vienna was awaiting an unprecedented number of people in transit. Like hundreds of other Viennese, I felt there there wasn't really anything to do other than help.

It was overwhelming to be at the jam-packed train station. There were people everywhere, from families with small kids and pregnant women, but mostly young men in their late teens and early twenties waiting for the trains. Grassroots organisations the Caritas and the Red Cross had arrived quickly and acted swiftly, so that among the swarms of volunteers and refugees there were supermarket trolleys with mountains of perishable goods up for grabs.

There was a pop-up bazaar on a platform with enough free food, drinks, sanitary articles, warm clothes and shoes to cater for thousands of people. The hashtag #trainofhope provided realtime information for donations and volunteers. There were people with signs welcoming the refugees and there were migrants with signs thanking Austria. There were people with paper signs sellotaped to their clothes onto which were written the myriad of languages they could speak, acting as ad-hoc interpreters. 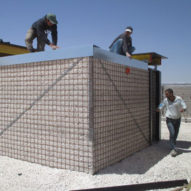 A couple who had identified that the designated hall with beds was not going to be enough and started gathering phone numbers from people who might want to host people over the bitter cold night, before they moved on with the next train (I missed a call at 3am).

A group of students was gathering a stream of information about the trains, schedules, specially commissioned trains, seating (and standing) availability, which routes could be taken so as not to be deported at the borders (don't go directly to Berlin since it crosses the Czech border), and were already working a raffle-ticket service for train tickets for the next day. Austria's national railway network turned a blind eye to refugees travelling within the borders and were not controlling tickets within Austria. The private Westbahn did the same, and dedicated special ticket-free carriages to help volunteers identify refugees at the stations.

Because identifying a refugee is not an easy thing. Amidst the many people giving out sandwiches, hot drinks, soups, apples, bananas, chocolate, packed lunches, and of course the many native speakers acting as interpreters, and the refugees from Syria, Iraq and even Pakistan and Afghanistan, the volunteers had a difficult time identifying who was in need and who was not. People desperate to help would go up to any dark-skinned person and offer assistance. With my fresh Mediterranean tan and dark hair and green eyes I was constantly being offered food, drinks, sweets and help too.

On Saturday evening the city of Vienna sellotaped welcome posters to the walls of the stations in both English and Arabic saying: "You are safe". And the feeling that was left when the platforms began clearing was that Europe has changed forever.

It's up to us to make sure it's changed for the better. But aren't most of the people arriving highly educated, highly motivated, with a strong survival will? Wasn't post-war America built by the creative minds of refugees? Albert Einstein is the obvious example, but Steve Jobs was the son of a Syrian migrant. I'm curious as to what creative and intellectual potential is arriving on European shores by foot, and as a designer I'm motivated to help unfold it.

As the short-term crisis turns into a longer-term reality, how can design intervene to create infrastructure, services and communities to solve problems, but also to fuel vision? Because design at its best is not about dealing with consequences but about creating futures.

How can we as designers optimise a full kit of belongings for the coming winter at no cost to the refugee?

Cameron Sinclair once said to me: "If they need water, drill a well." He was referring to the most direct and grassroots way of solving a problem. For the mid-term solutions I imagine design can harness makerism and provide exactly that – grassroots solutions to obvious problems. For example, if people are donating bags to refugees, can we utilise the city's fablabs to build mountable wheels that turn heavy bags into cross-country trolley suitcases? Or, if the winter is coming and all that people can donate are cheap but functional sports shoes, can we take over the fablabs and laser-cut customised, made-to-measure shoe inlays out of felt for extra warmth? How can we as designers optimise a full kit of belongings for the coming winter at no cost to the refugee and at the littlest cost for us?

Luckily, the heart of Europe is a melting pot of creative and social entrepreneurs. I strongly believe that beautiful projects where the emotional, intellectual and human needs are the driving force will emerge. The secret is to create hyper-local projects with a pan-European scalable appeal that not only prepares people with the skills needed for "integration" (such as language) but also appeals to their sense of self-value and community.

I call to all designers and architects to ditch their preconceptions of refugees and start at a human level. I call on them to put aside time to use their problem-solving skills to build visions and conserve human dignity. You can volunteer, you can spend money, or you can use your creativity. Further down the line architects and planners will be needed to ensure that refugees aren't funnelled into shanty towns or ghettos where they will be marginalised.

Creative individuals, companies and organisations in Vienna are already mobilising

Meanwhile creative individuals, companies and organisations in Vienna are already mobilising to help. Sophie Pollack, owner of fashion boutique We Bandits, is one of the founding members of happythankyoumoreplease.at, which has mobilised its network to collect and distribute donations to the Traiskirchen refugee camp.

Media artist Raoul Haspel published the song Schweigeminute – literally a minute's silence – to raise funds for thankyouhappymoreplease. It is already number one on the iTunes charts.

Alli Mahlodji from video platform Watchado gave out a video and call for supporters to help film video of individual refugees to tell their stories not only as refugees but as people.

My neighbour, the musician Boxer John of The Vintage Underground radio series, has reached out to Traiskirchen to see if community can be created through sharing music on his platform.

Everyone can likewise help shape the Europe that we dream of: human, full of compassion, full of opportunity.

Because as Viktor Papanek once said: "The only important thing about design, is how it relates to people."

Talia Radford is the founder of TaliaYStudio, a Vienna-based design firm that focuses on product design for social innovation. Born in Spain, she was educated in England before moving to Vienna, where she studied Industrial Design at the University of Applied Arts. Her studio's projects include a range of "holdables" that offer a satirical take on wearable technology, and the Jelly Series of necklace pendants that double as coloured-glass camera filters.