German designer Konstanin Grcic has collaborated with British sailor Alex Thomson to design a black racing yacht for fashion brand Hugo Boss that will compete in a round-the-world race.

Thomson, who holds two world records for sailing and is the youngest skipper ever to win a round the world race, will use the yacht to compete in the Vendée Globe, a non-stop solo round-the-world race that will start in November 2016.

"Tools for sport are primarily about precision and efficiency, which translates directly into elegance and beauty," Grcic said. "So being involved in the design of the HB6 racing yacht with Hugo Boss and Alex Thomson was a dream come true for me." 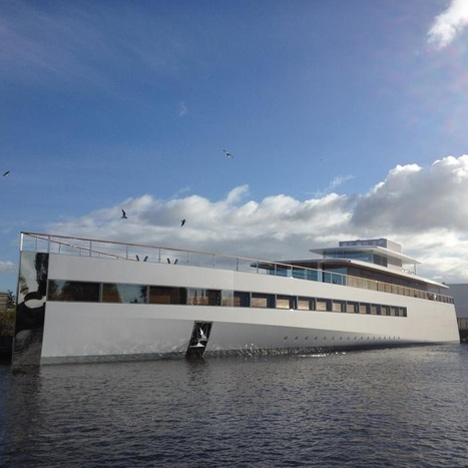 Hugo Boss has sponsored Thomson for 12 years. Its branding features on the hull and sails of the vessels he captains, which also carry its name.

Grcic worked closely with Thomson to design the aesthetic elements of the boat, as well as the navigation and sleeping areas onboard – where the sailor will spend the majority of his time during the three-month voyage.

"It needed to be a practical space, but still provide a comfortable sleeping environment," Thomson said.

To get a feel for how the spaces would be used, Thomson took Grcic for a sail on the previous Hugo Boss model.

"It was incredible to watch Alex at work, and to listen to him discuss ideas for the new boat," said Grcic. "Even though Alex is not a designer, his innovative thinking is driven by a combination of rationality and creativity, which is very similar to how we work in design."

The new boat's outer skin is made of layers of carbon fibre, which are impregnated with resin. The core is made of Nomex – a rigid plastic structure made from a honeycomb of hexagonal tubes – and the inner skin is carbon fibre, creating a sandwich-like structure.

The deck was constructed upside down within a mould, as this is the easiest and fastest way to build according to Hugo Boss.

Compared to previous iterations of the yacht, the new design is five per cent lighter at 7.5 tonnes and significantly faster with a top speed of 35 knots.

Before the Vendée Globe, the boat will take part in a series of transatlantic competitions including the TJV race from Le Havre in France and B2B Race that starts from the Caribbean island of St Barts.

Grcic is better known for his furniture designs, with recent examples including a chair with a tube-shaped backrest and a seating range assembled from flat wooden planes.

"I have been fascinated by the design of sports equipment since my teens," said Grcic. "In fact, you could say that sports gear was my first real design teacher. I spent countless hours looking at everything from running shoes to skis to bicycles; studying how they were made."

Other industrial designers that have taken on the challenge of designing a boat include Philippe Starck, who created a super yacht for late Apple founder Steve Jobs, while architects Norman Foster and Zaha Hadid have also designed sea-faring vehicles.