Lenny Kravitz has become the latest celebrity to move into furniture design, joining the likes of Brad Pitt, Pharrell Williams and Vanilla Ice with a range of products and lighting that includes a table topped with a sheepskin pillow (+ slideshow).

The CB2 x Kravitz Design by Lenny Kravitz range takes references from the "sleek glam of the 1970s New York club culture and the natural ease of the California music scene of the 1970s," according to a statement.

"Our goal was to create a collection of pieces based on my personal style and the things that have inspired me throughout my travels," said Kravitz, who is better known for his work as a musician and has more recently starting building a career as an actor in films like The Hunger Games.

His company, Kravitz Design, was set up in 2003 and has completed the interiors for the SLS Hotel South Beach, Miami.

"Lenny is a weapon of massive construction," reads a quote from French designer Philippe Starck on the SLS website. "He is an exlposion of all talents, an unlimited boiling bucket of culture, a daily firework, a tireless explorer." 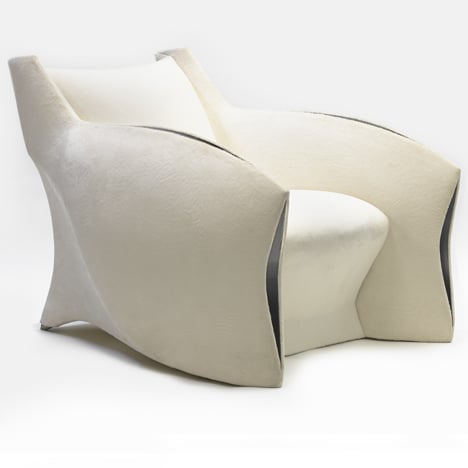 Kravitz Design's first furniture collection will be available to purchase from 1 October 2015. Customers who can't wait until then will be able pre-order items on 15-16 September.

The American musician will apparently be using the pieces to furnish his own homes.

"This collection will appeal to a diverse group of people and we look forward to using them in future Kravitz Design projects, as well as my houses in Bahamas and Brazil," Kravitz said.

Among the designs is the Foxy Table, which includes a dish-like top that can be used to hold a sheepskin-covered cushion.

The Nova Table features a faceted underside, while the circular YaYa Table hides a storage compartment beneath a removable wooden tray.

Custom-designed patterns are used across cushions and rugs, and also decorate the cupboard doors of storage units.

The bases of the Baba Table and Lola Table Lamp both look like upside-down wine glasses, but are made from a highly-polished metal.

"The development of this collection was a truly collaborative design process," said Ryan Turf, managing director for CB2. "Lenny Kravitz and the Kravitz Design team's sophisticated perspective helped create a collection that is both beautiful and practical, earthy and elegant, and a great complement to our CB2 aesthetic."

Kravitz is among a long list of celebrities that have tried their hand at design. Earlier this year, Antonio Banderas announced that he will be studying fashion design at Central Saint Martins, while Kanye West has launched a collection of clothing and footwear for Adidas.

Also working with the German sports brand, Pharrell Williams has created trainers with Zaha Hadid, but has also used ocean plastic to produce clothes for G-Star RAW and has even designed a chair with legs that look like caterpillar wheels.

Brad Pitt launched a furniture and home collection in 2012, while Kate Winslet and Daniel Radcliffe both designed products for Habitat back in 2007.