News: musician Kanye West has partnered with Adidas to produce Yeezy Season 1 – a collection of clothing and footwear that he described as the world's "first solutions-based" clothing line (+ slideshow).

Kanye West's line for Adidas' Originals brand was unveiled at a show to mark the beginning of New York Fashion Week last night.

The Yeezy Season 1 collection included the Yeezy Boost – a limited-edition trainer-boot with the brand's unique bouncy sole technology that is released tomorrow. 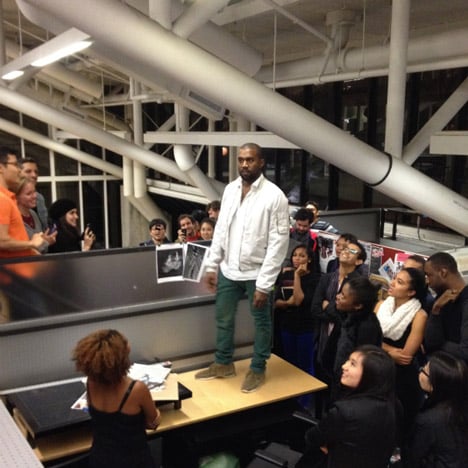 "The world can be saved through design" says Kanye West

The bumpy surface of the thick white Boost mid-sole is wrapped in a ribbed plastic sole, and the upper is made from grey suede, with a wide fabric strap across the front and lacing similar to the type used for hiking boots.

Adidas said that the pieces in the collection would create a wardrobe of essential pieces that would "absolve consumers of dressing's daily stress" by offering simple items that could be appropriate in a wide variety of situations and "freely combined in infinite ways".

The range of clothing was produced in a muted colour palette of flesh tones, combined with shades of bluish-grey, beige, muted greens, and many of the items shown had raw or distressed seams and hems.

"This is a challenge to where fashion is currently — a new feminine ideal," said West.

An injection of bright colour was provided by one fuchsia pink oversized t-shirt-style dress, worn by a model with the sleeves of another top tied loosely around her waist. A red-themed outfit featured a similar dress in burgundy, matched with maroon tights.

The menswear shared a similar silhouette, with oversized tops and fitted bottoms. Pieces include bomber-style and washed-cotton jackets, and oversized tracksuit bottoms and "perfect T-shirts". The men's pieces were designed to also be worn by women.

"A study in contrasts like street-luxury and vintage-new, the clothing shapes a new modern wardrobe," said Adidas.

The show itself was designed in collaboration with conceptual artist Vanessa Beecroft. Guests were led in to a room with subdued lighting where models were arranged in nine lines. As each row stepped forward to show the clothes and shoes they were wearing, the lights were brightened to a level that Adidas described as "blinding intensity". The soundtrack included an unreleased song from West's next album.

West worked with Adidas' products team to design the collection. "They are a super innovative company that gives artists a platform to create and dream," he said.

Adidas launched the latest iteration of its Boost mid-sole technology last month, with the unveiling of the Ultra Boost trainer in New York.

Eric Liedtke, executive board member for the sportswear giant, told Dezeen that Adidas needed to "overcompensate from a design point of view" to grow its market share in the US.