Architects Ronald Janssen and Donald Osborne were invited by developer Buro Amsterdam to revote the factory, which was formerly used for making gearwheels – the toothed wheels used in gear systems – but had been sitting empty for more than a decade.

"It's important to preserve the gearwheel factory because many of these factories in the centre are demolished for newer and bigger developments," said Janssen.

"The zoning plan makes it possible to build three floors, so developers tried to demolish the existing building and build new dwellings."

Although they were tasked with turning the building into functional homes, both Janssen and Osborne were keen to preserve as much of the factory's original features as possible. 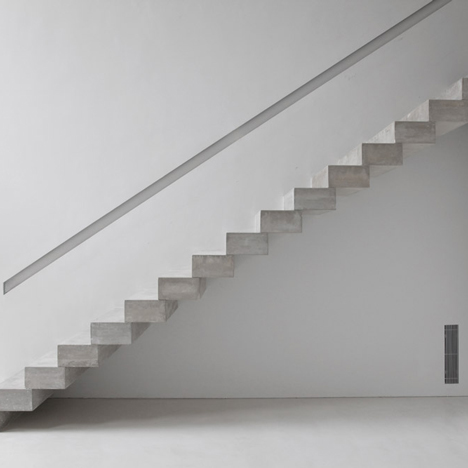 "Despite the fact that the factory is not of any particular architectural or historical significance, I think we have to embrace these old buildings," said Janssen.

The 12 new residences are organised in back-to-back rows of six. Five existing openings, previously used as loading bays for the factory, were retained and a further seven were added to create an entrance to each home.

Large sliding gates of perforated steel conceal sheltered loggias, which act as private front gardens where bicycles can be kept, and where the front doors are located.

"The pattern of holes is inspired by old photographs of the factory interior; a different image is used for each gate," said Janssen. "We pixilated the old photographs, until they became an abstract pattern."

Living spaces are split across two levels inside each unit. The ground floors are dominated by open-plan lounge, kitchen and dining spaces, with a toilet and storage arranged along the outer wall.

Bedrooms and a roof terrace occupy half of the first floor level, while the other half is left as a double-height space above the living area to make the most of the multiple peaks in the sawtooth roof.

These tall volumes run in a strip through the middle of the building and are intended to suggest a factory aesthetic, with retained steel trusses that have been brushed clean and left exposed.

Large glazed panels cover part of each roof section, allowing an abundance of natural light to flood the space.

Windows that are no longer necessary have been filled in using cement, appearing as visible "scars".

The architects intentionally left the interior unfinished, with no kitchen or bathroom fittings, temporary stairs and unpainted walls.

"These types of dwellings tend to attract people that prefer to design their own interior," said Janssen.

According to the architects, the building was overgrown with ivy when they first visited it. "It was like a green oasis in the city," said Janssen.

Although the vegetation has now been removed from the masonry, the architects have added various planters at street level. New roof sections have been planted with sedum to add more greenery.

"Everyone I have shown the building to has said [they] want to live here because it offers a different, more introverted way of living compared to more conventional forms of housing in Amsterdam," said Janssen.

Many of Amsterdam's former industrial spaces are being repurposed as demand for offices and housing in the city grows. Recent examples include a boiler house converted into a headquarters for an investment company and an old warehouse turned into workspace for smartphone manufacturer Fairphone.