French architecture studio Urbane Kultur has refurbished and extended this dome-shaped swimming pool just outside Strasbourg, which is one of nearly 200 built around France in the 1970s (+ slideshow).

The Tournesol swimming pool was built in 1975 in Lingolsheim, just outside Strasbourg, but suffered from poor insulation and a cramped layout, with changing rooms around its perimeter. To rectify this, Strasbourg studio Urbane Kultur was commissioned to refurbish the building and add an extension at the side for new changing rooms and offices, freeing up space inside for two new swimming pools.

"The design has amazing spatial qualities and natural light, but it was barely insulated, too small, and not wheelchair-friendly," the architects told Dezeen.

During the 1970s and early 1980s, 183 of the dome-shaped swimming pools were built in France. The design, by architect Bernard Schoeller, is one of a number commissioned by the French government to encourage more people to swim, following the country's poor performance in the sport in the 1968 Olympics.

Schoeller named the buildings Tournesol – or sunflower in English – and built them with a self-supporting steel-framed dome that allows for a large column-free space inside. They also feature two curved sliding panels so that one side of the building can be opened up in summer, inspired by the way sunflowers angle themselves towards the sun. 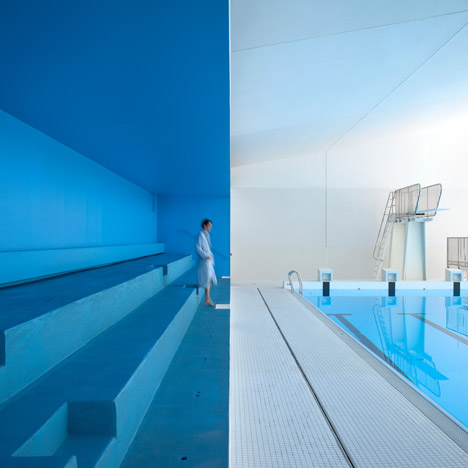 Some of the pools have since been refurbished, a few have been heritage-protected, and more than 40 have been closed, irreparably damaged, or demolished.

"The city of Strasbourg wanted to preserve this 20th-century architectural heritage, rather than replace it with a new building," said the architects. "A lot of people learned to swim in Tournesol swimming pools and have good memories of them."

Save for the steel frame, the concrete foundations, and the original 25-metre pool, the entire dome was rebuilt in order to improve its insulation. The exterior was then clad in black rubber and the interior was covered in white stretched canvas.

At the sides, where changing rooms and the entrance used to be, two new pools have been added. One has a water jet and a tidal swimming zone, and the other provides a paddling pool for infants.

A curved section of glazing was also added at the side, where the previous entrance was, offering a view of a new landscaped courtyard outside.

Beside the dome, a boomerang-shaped extension has been added, with a discreet corridor linking the two buildings. It replaces a car park and two box-shaped buildings that housed an equipment room and a lifeguards' room.

"The dome made any extension difficult," said architects. "How do you increase the capacity of such an object without altering its image? This is why we designed the extension as an independent building that wraps around the dome, barely touching it."

The extension provides 1,190 square metres of new space, doubling the size of the complex. It houses offices and rooms for technical equipment in one wing, and showers and changing rooms in the other wing, and was clad in steel panels to provide subtle reflections of the surroundings.

Urbane Kultur is now working on the refurbishment of another Tounesol swimming pool in Ferette, 154 kilometres south of Strasbourg, near the Swiss border.

"It's unfortunate that a lot of Tournesol swimming pools have already been demolished," said the architects. "We hope we can convince cities to refurbish them instead. We think of them as part of our popular modern history."

Other swimming pools featured recently on Dezeen include one raised on a huge cone-shaped concrete plinth for a Croatian house and a design for a glass-bottomed pool suspended between two apartment blocks in London.

Photography is by Jean Baptiste Dorner, unless otherwise stated.