The apartments in this new Berlin co-housing project by Zanderroth Architekten were designed without the need for load-bearing walls inside, giving the owners flexibility to decide on their own layouts (+ slideshow).

The cb19 apartment complex by Berlin-based Zanderroth Architekten comprises two seven-storey buildings that bookend a site in the neighbourhood of Prenzlauer Berg, with a courtyard between them to house bike storage and a children's play area.

The architects built each floor with concrete panels that have a hollow core, offering both strength and a reduced weight. This allowed them to create clear spans from the front to the back of each apartment without the need for supporting walls inside.

The owners were then free to decide on their own floor plan. Most chose two- or three-bedroom layouts, however three owners created maisonettes by combining apartments across two levels, and one owner combined four apartments on the top two levels to create a double-storey penthouse.

"No flat is equal to another," architects Sascha Zander and Christian Roth told Dezeen. "The owners each had three meetings to talk separately about their floor plans, bathroom design and electricity installations." 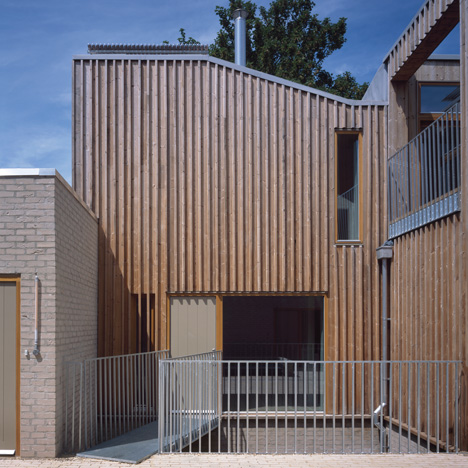 The building was designed as a co-housing project in collaborating with German organisation SmartHoming, who helped find and develop the site. The 27 owners then formed a company to finance the construction, and worked with the architects to tailor the apartments.

"We pre-arranged all necessities for the group, so they could form a very organised building cooperative. In other cases, they would have to discuss various details of the planning, and there would be problems because of the lack of experience," said the architects.

"The advantages are greater individual freedom of design and lower costs, combined with higher architectural quality," they added.

The popularity of private co-housing projects is growing in Germany – Zanderroth Architekten currently has 10 similar projects under construction or completed – and the idea has also come to the UK. Last year Dezeen featured London's first co-housing project, where six homeowners pooled together to buy a site and build individual houses on it.

British architect Richard Rogers called for more innovation in housebuilding earlier this week, when his firm unveiled its prefabricated housing scheme for homeless people in London.

The cb19 apartment complex was built on a site formerly occupied by a small car repair workshop, between two older apartment buildings. To create a sense of continuity on the street, it follows the height and set-back of its neighbours, but has a largely glazed facade to distinguish it as a modern addition, broken up by aluminium panels that open to provide ventilation.

"The facade contains similar characteristics to the older buildings, but in an inverse way," said the architects. "The gentle emphasis of the horizontal lines offers a connection to the surrounding buildings, and the colour of the aluminium was also chosen to smooth the contrast with the neighbouring buildings."

Bedrooms were placed at front of the building, which faces northeast, and living spaces were placed at the south-facing back, where balconies have been added to provide shade.

"The large glazed sections allow more light into the side of the buildings which would normally be darker, and offer a closer relationship with the city from inside," explained the architects. "We didn't repeat this at the back, where the building would heat up faster."

A single lift shaft in the two buildings provides direct access to all apartments, and stairs have been placed behind this to provide a fire escape, accessed via the balconies at the rear.

"We wanted to avoid the need for stairs in daily use," said the architects. "After parking in the basement, the owners can reach their apartment directly with the lift. This is normally a penthouse privilege, which we wanted to offer everyone."

The planning and construction of the building was completed over four years, and the cost was €1,445 (approximately £1,057) per square metre, excluding taxes and fees.

"The project is affordable considering the quality and the freedom of choice for the owners," said the architects. "This price was only possible because we decided to repeat the main facade on the second building, and because we chose pre-cast concrete to build the floors, which sped up the construction process."