An inset storage box is concealed in the centre of the table, and is accessed by lifting off three shorter pieces of wood. A similar cubby-hole is hidden in the seat of the bench.

The collection also includes a bookshelf that rests on two central hole-punched poles which support three shelves and a cabinet towards the bottom with wooden sliding doors. 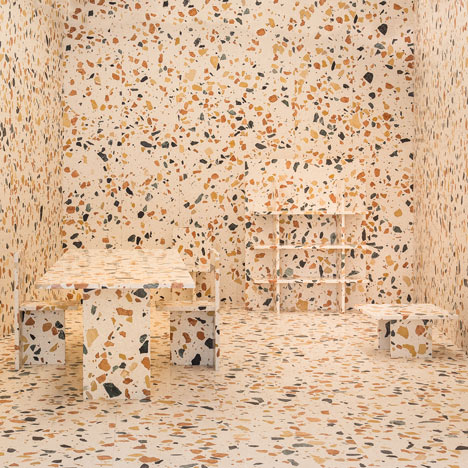 "I started with a rigorous understanding of the processes involved from log to boule and then stripped away all superfluous detail," Lamb said in a statement

"I've used full-width planks as the defining feature, both structurally and visually, with the key intention being to make a collection of furniture with utility, strength, durability and economy of material," he added.

Lamb has previously designed furniture built only from standard wooden dowels, as well as a collection of chairs and tables constructed from manmade marble for London design brand Dzek.

   "As a maker I really admire Max Lamb’s clarity of thought and way of approaching design," said Benchmark co-founder Sean Sutcliffe. "He is entirely driven by his fascination with material and process, breaking it down to its purest expression with no concern of style or fashion.

Other Benchmark collaborations covered by Dezeen include a collection of furniture built using coppiced chestnut wood by British designer Sebastian Cox, and a re-issue of Jens Risom's iconic 50s and 60s furniture.

The collection is on display as part of Factory: The Reunion of Design, Craft and Industry which is being shown at The Future Laboratory on Elder Street during the London Design Festival, which takes place from 19 September to 27 September.