London Design Festival 2015: the Royal Institute of British Architects' annual Regent Street Windows project returns with 13 new installations up and down one of London's most famous shopping streets (+ movie).

The RIBA Regent Street Windows project, which runs until 27 September 2015, pairs architecture firms with retailers on Regent Street to create a series of bespoke installations.

"Regent Street has beautiful architecture that's been really well-developed over the years," says RIBA chief executive Harry Rich in the movie, which Dezeen produced for RIBA.

"To have dynamic and challenging shop window displays up and down that classical architecture is something I hope shoppers and tourists will really enjoy."

Hassell worked with Karen Millen's in-house atelier to drape twists of printed fabric across all 30 metres of the fashion store's shopfront.

"We want the audience to be drawn in by this theatrical backdrop and to instil a curiosity about the brand, the craft and what the new collection is all about," says Hassell's Sarah Willats. 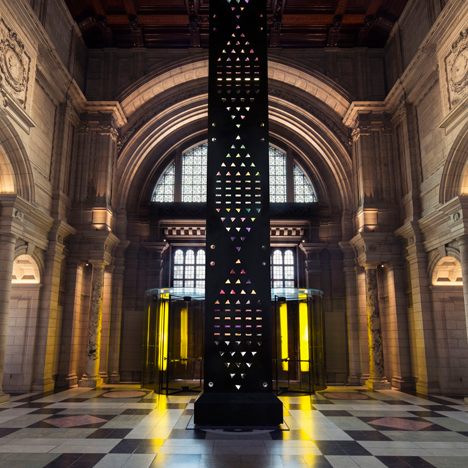 "As architects, we can bring our knowledge of structure and form to explore these materials."

EPR Architects worked with Vertikal Space and the Materials Council to create a display made from hundreds of painted pieces of bamboo for Anthropologie.

Conran and Partners collaborated with designer Billy Lloyd to suspend a series of ceramic button-down collars in Brooks Brothers' window.

Space Group Architects covered Penhaligon's window bays with moss and bark to represent aspects of the perfumer's two latest fragrances. A combination of music and smoke emits from the doorway to lure passers-by inside.

"We got in touch with electronic musicians to compose a soundtrack for both window bays," explains Space Group Architects founder Martin Gruenanger. "I like to call the installation a multi-sensory experience."

AMD Interior Architecture created a flock of denim jeans suspended from the ceiling, which lead customers through Levi's store to the denim brand's new collection.

How About Studio's Nick Wood teamed up with architect Gillian Lambert to create a lenticular wall made from shirts by Hawes & Curtis. From one side, passers by see black and white stripes, while the other angle reveals a blown-up detail of a check pattern.

"Our audience is always moving on this street and so our design really tried to respond to that," explains Wood. "We only had a small budget to work with, so we had to be creative from the outset."

For Longchamp, LDVC created a mobile of translucent shapes based on the form of the brand's best-known bag, Le Pliage Heritage.

Citizens Design Bureau celebrated the 150th anniversary of Hotel Café Royal by hanging golden letters together with cakes in the famous hotel's window.

Office S&M installed a series of optical illusions in one of toy store Hamleys window bays.

Michaelis Boyd Associates created a swirling installation based on the structure of an atom for skincare brand Kiehl's.

Coppin Dockray Architects also chose to play with reflections in their installation for L'Occitane, which consists of a series of jagged reflective and non-reflective elements arranged to form a kaleidoscopic pattern.

"We have to compete with reflections from outside," says Bev Dockray. "But we also like the idea that they become part of our installation."

RIBA's Regent Street Windows 2015, which was developed in partnership with Regent Street, launched on 7 September and will continue throughout London Design Festival until 27 September. You can download a map showing the locations of all the projects and listen to the architects describe their designs with RIBA's free audio guide.

This movie was produced by Dezeen for RIBA. The music in the movie is by Wave Crushers. All the photographs used in the post are by Liam Clarke.