The design aims to reflect the handcrafted quality of Feit's leather shoes and merge it with a modern and minimal aesthetic, said Maisie, who collaborated with the company's owners, Tull and Josh Price.

"The interior has a unique identity – prioritising process, craft and innovation, while pushing the tension between what is handmade and what is machine made," said Maisie, who is from Australia but now based in Brooklyn.

The shop "has a clean aesthetic featuring geometric shapes created by volume and void," she added.

The linear space features a labyrinthine composition of floor-to-ceiling wooden forms, with openings that provide sight lines between the interior and the street. 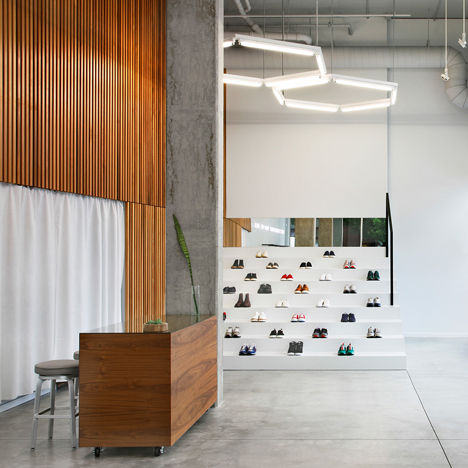 Similar to the process of shaping leather, the design team used moulds to carve out display shelves from blocks of timber during the 3D-modelling stage.

The shelving components, made of Baltic birch plywood, were cut using a computer numerically controlled (CNC) machine. They were formed into modules and then delivered to the store.

"Each unique shape was CNC cut, hand sanded and assembled into modules offsite by the fabrication team, which enabled a complex build sequence to unroll on site," said Maisie.

Embedded within the wooden shelving units are white LEDs that brighten and dim in accordance with the seasons. Carefully placed mirrors help visually expand the room.

"Both the architectural and lighting design play with your perception of depth, as you try to distinguish where the boundaries within the space lie," said Maisie.

The design team has named the space Installation Two: Volume and Void.

This is Feit's second store in New York. The other, which opened in 2014 in Nolita, was also designed in collaboration with Maisie and features large slabs of natural wood.

30,000 red shoelaces hang from the ceiling of Melbourne's Camper store

Described as an "innovator in the neo-luxury movement," Feit produces high-end boots, sneakers, and dress shoes for men and women, along with a small line of accessories. Its products are made of all-natural, non-synthetic materials.

Feit was founded by brothers Tull and Josh Price. Tull is known for starting the cult sneaker brand Royal Elastics, which he launched in 1996 and sold in 2002.

Maisie is an Australian installation artist who creates interactive and sculptural designs. Her work has been exhibited in galleries, museums and festivals throughout Australia, as well in select countries around the world. The Feit flagship store in Nolita was her first project in New York.

She currently is pursuing a master's degree in architecture and an MFA in lighting design at Parsons: The New School for Design.

Other recent shoe boutiques include an austere shop in Seattle by Best Practice Architecture, a children's shoe store in Barcelona by Nábito, and a pop-up shop for Camper in Germany by Diébédo Francis Kere.