To make the most of the Ein Gedi Street apartment's 55 square metres of space, the pair knocked through existing walls and used wood panels to divide the apartment into rooms.

Visitors enter into an open-plan kitchen, living and dining space, which is separated by a section of wooden panelling from the two bedrooms and bathroom – enclosed by a pair of parallel sliding doors. Herringbone parquet in the living area contrasts smooth cement flooring in the bedroom. 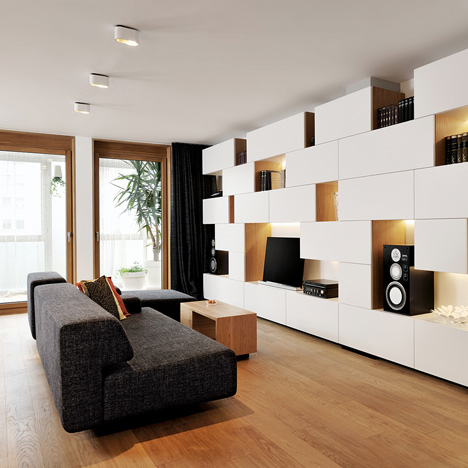 A small work space with a desk and chair is set into a niche in the panelled wall, which also contains "hidden" cupboards. A series of round holes in the cupboard adjacent to the living area have been designed to release heat from electronic equipment stored there.

"The apartment is pretty small and every centimetre mattered," Zusman told Dezeen. "We wanted to provide as much storage space as possible and yet save the 10 centimetres width that a typical built wall would require."

"Secondly we aimed for an appearance that was different, more impressive and smooth, and we felt that carpentry would provide this," she added.

The pair made the most of the apartment's structural cement pillars – now hidden beneath panels and used to form shelving units.

A wall of storage also features in architects Pedro Varela and Renata Pinho's renovation of an apartment in Portugal, while Israeli architect Ranaan Stern also made the most of limited space, adapting a 15-square-metre room to create a studio with modular storage compartments.

As well as walls, Zusman and Navon designed living room tables, shelves, a bed, and the kitchen island. "We were aiming for an interesting contrast of clean yet colourful, modern yet homey, tough yet soft," said Zusman.

Much of the furniture blends wood and metal, and the duo used found items – such as the green chairs on the balcony that had been thrown away by a neighbour.

Flashes of colour are spread across the apartment, from the blue-painted workspace niche, to the pink of the doorway interiors, and a pale green hanging storage panel in the bedroom.

"As the renovation took place in the summer, 10 minutes away from the beach, the summer colour vibes definitely influenced us but are anything but typical," Zusman added.

A sliding door also gives residents access to a balcony that stretches almost the entire length of the living space, and overlooks nearby greenery.

"Generally, despite the fact that the space is very small we wanted the apartment to feel large, spacious and airy," the designer said.