Apple is rumoured to be planning another new campus in California's Silicon Valley – a clover leaf-shaped complex by architectural firm HOK featuring a two-acre roof garden and a sunken amphitheatre (+ slideshow).

Apple has sealed a deal with Francisco developer Landbank for the lease of an 18-acre (seven hectare) site in Sunnyvale, Santa Clara, according to Silicon Valley Business Journal reporter Nathan Donato-Weinstein.

Described by HOK as a "futuristic tech office campus", the vast clover leaf-shaped campus will be located north of Cupertino, the home of Apple's existing headquarters and its new Foster + Partner's-designed campus.

Over 71,500 square metres of office space will be split across its trefoil plan, while two miles of walking and biking trails will crisscross the campus' grounds.

Over half of the site will be given over to greenery, including a two-acre (8,000 square metres) roof garden – a popular feature among new Silicon Valley campuses, including Facebook's new headquarters by Frank Gehry.

"The relationships between buildings and open space are inspired by the dynamic relationship of converging biomes in the Santa Clara Valley," said a statement from HOK. 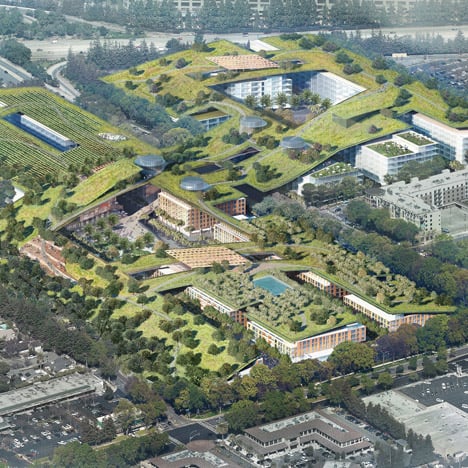 "Each of the three four-storey office buildings will feature an internal courtyard designed for year-round use with pedestrian pathways connecting all facilities and outdoor spaces."

HOK, a global architecture firm with 25 offices on three continents, has previously worked on a masterplan for the World Expo 2020 in Dubai and the British Embassy building in Jakarta.

The building will replace an 1970s business park at the corner of Central Expressway and North Wolfe Road, so the new campus is currently known under the name Central & Wolfe.

"Our philosophy was simple," said Landbank chief executive Scott Jacobs. "Design a campus that would deliver an exciting, enhanced and enjoyable user experience. In this case, the users include companies, their employees, surrounding communities and Mother Nature."

A second stand-alone building will contain cafes, bankings, sports facilities as well as shops across its two rectilinear floors.

Between the two buildings, a landscaped plaza will feature a 500-person sunken amphitheatre, public artworks and dining areas with access for street food trucks.

Four subterranean levels below the plaza and building provide car parking, while pedestrians will be able to travel via a designated shuttle service proposed at nearby Lawrence and Sunnyvale Caltrain stations.

"With a target of LEED Platinum certification, the team is currently exploring options that would move the campus closer to net zero energy use," said the firm.

Silicon Valley has become known as the home of technology companies. Earlier this year Google also unveiled plans for a new campus there by BIG and Thomas Heatherwick, featuring outdoor areas covered in translucent canopies.