During the show, actress Gwendoline Christie – best known for her role in TV drama Game of Thrones – lay on a circular plinth that was surrounded by three robotic arms.

The robots were covered in a spiky material that was "grown" using magnets by designer Jólan van der Wiel, who has previously collaborated with Van Herpen to create dresses and shoes using the same method.

As Christie lay still, the programmed arms worked to form a garment around her by combining various production techniques – "interlacing an architectural mesh which rays out around her".

"The live process blends different techniques – laser cutting, hand weaving and 3D printing into one dress, which spreads from the centre, quaquaversal in its geometries," said a statement from van Herpen. 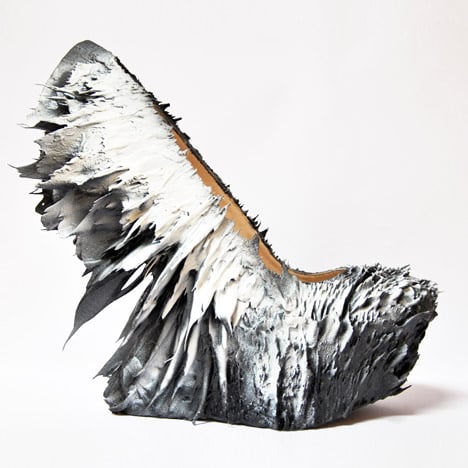 The shape of the dress, which eventually splayed outward in all directions, gave its name to the collection's title.

Van Herpen showed another circular dress made from metal gauze as part of her Autumn Winter 2015 range, while her previous collections have included a variety of 3D-printed garments, as well as models suspended in vacuums between plastic sheeting.

The designer said that her influence for this latest collection came from the tree bridges of India – made from banyan tree roots that were shaped and coerced by man to span across rivers and gorges.

"The beautiful potential of plants and other organisms to form living architecture inspired me to make a collection that is tangled like a maze around the body," said Van Herpen.

"Inspiration came from the way plants and their roots grow, and how roots have been used to grow living bridges in the forests of India."

"This tradition of growing bridges inspired me to re-envision my process of making a garment," she added.

Different types of lace were used to create other garments in the collection, including a fine organic material from Calais, a graphic maze-like design, and leather embedded with ceramic stones from crystal brand Swarovski.

The colour scheme was limited to white, nude, grey, silver and black tones.

This extended to the shoes, named Airborne and developed in collaboration with Finsk. They featured a thin platform to create the illusion of the wearer being suspended above ground.

Also during this season's Paris Fashion Week, Hussein Chalayan used a catwalk shower to dissolve a pair of soluble outfits and Akris based its collection on architect Sou Fujimoto.